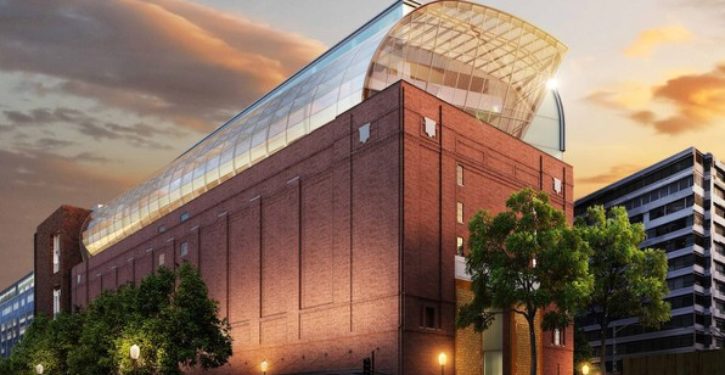 Nearing completion three blocks from the Capitol dome in Washington, D.C., is an enormous, dazzling museum based on the best-selling most influential book of all time.

Quotes from the book are carved in stone on monuments and buildings throughout our capital city. With their hand on this book, our presidents take the oath of office. The book impacted our Founding Fathers along with numerous other presidents and leaders throughout history.

Including up to today, the book’s influence on mankind and civilization in general makes this magnificent structure worthy of its name, The Museum of the Bible.

Scheduled to open in November, The Museum of the Bible will be the most state-of-the-art, high-tech museum in the world. According to the museum’s promotional material, cutting-edge technology allows visitors “to span time, space and cultures, inviting everyone to engage with the Bible.” And that is no exaggeration! Having recently toured the museum in its late construction phase, I saw the makings of the museum of the future that render most other museums antiquated.

The Museum of the Bible is the vision of the Green family from Oklahoma, owners of the Hobby Lobby chain of 600 arts and crafts stores. The Greens and Hobby Lobby became nationally known after winning a landmark 2014 Supreme Court religious liberty case against the Department of Health and Human Services. Based on their religious convictions, the Green family rejected a mandate from HHS that their employees’ health-care plan include a provision for abortifacient contraceptives that cause miscarriages.

As devout evangelical Christians who have prospered in business, the Green family amassed a collection of many of the world’s most historic Bibles and religious artifacts. Their dream was to build a Bible museum in Washington D.C.

Then, in July 2012 news leaked that the Washington Design Center building was sold to David Green for $50 million as the future site of the Bible museum. Construction began in December 2014.

Three years later, on Nov. 17, 2017, at the cost of half a billion dollars, the museum’s 40-foot-tall bronze doors are scheduled to swing open to an experience the Greens hope will be life-changing for thousands of visitors from across the nation and the world.

Cary Summers, president of the Museum of the Bible told me:

The impact of the Bible is felt the world over, so it stands to reason that a project like this should be made accessible in the museum capital of the world. We’re excited for people from all walks of life to experience this remarkable book, in one of the most engaging museum environments, just a few blocks from Capitol Hill.

The History floor is described as one that will “showcase archeological evidence through modern cinematic storytelling to bring the Bible’s biography to life.”

The Narrative floor “shares the stories of the Bible as a four-dimensional experience –sights, sounds, smells, sensations.”

The Impact floor expresses “the incredible breadth and depth of the Bible’s impact over the centuries or the world’s cultures, many aspects of civilization, and on daily life.”

There are also extensive libraries, galleries, and research facilities. On opening day there will be accolades for how a building originally constructed in 1923 has been transformed into a marvel of modern architectural innovation, beauty and meaning.

The Museum of the Bible is much more than the world’s newest state-of-the-art museum. It has been built and designed to be a living testament to the Book inspired by God that will never be outdated. Therefore, the “living Bible” will be experienced in the museum’s 472 seat theater that will host live performances and in a ballroom that seats 500 for dinner and 1,000 for lectures. Receptions, events and celebrations will be held inside and on a large rooftop garden with a stunning, close view of the Capitol dome and the Washington Monument. The museum is envisioned to be a hub of activity for the community of all religions.

The museum’s collection will display 40,000 biblical antiquities, including fragments of the Dead Sea Scrolls and the world’s largest private collection of Torah scrolls, spanning more than 700 years.

Some modern collectibles include Bibles once belonging to presidents and celebrities (hint: Elvis is in the building). Visitors will see the original manuscript of the “Battle Hymn of the Republic,” which draws extensively from biblical imagery as an example of the thousands of fascinating items on display.

The museum’s visual experience is highlighted by a massive 140-foot length LED ceiling screen that runs the length of the museum’s grand lobby. The screen will change frequently showing scenes from the Bible and inspired art.

After touring what is in the process of being built and seeing virtual videos of the finished product, I was astounded by the potential impact this impressive museum will have on visitors who are unfamiliar with the Bible or those with no faith. The problem will be enticing the latter through the door. Perhaps the visual technology will be the buzz that serves as a hook. But once inside, the power of the Bible could stimulate further interest and even sprout seeds of faith.

The Green family’s dream of housing their Bible and artifact collection while bringing the Bible to life using the latest design techniques is almost complete. In Washington, D.C., the Museum of the Bible will be a ray of light in what is often a dark city. Soon the capital will host a spectacular museum worthy of the book that bears its name.

Today’s the day: Facebook begins flagging ‘fake news’
Next Post
New Yorkers’ message to mayoral candidate Hillary Clinton: Thanks, but no thanks