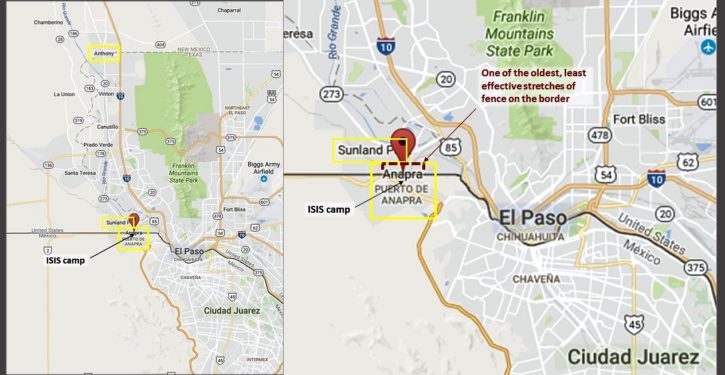 That’s what we did here at Liberty Unyielding back in 2014 and 2015, when Judicial Watch published its scoop on the ISIS camp at the U.S.-Mexico border near El Paso.

The analyses from Judicial Watch and other websites emphasized how close the ISIS camp was to El Paso – understandably, given the co-location of Fort Bliss on El Paso’s east side, and the size of the U.S. and Mexican cities (El Paso and Ciudad Juarez) on either side of the border.  Traffic at the border is heavy going both ways on a daily basis.  The vulnerability for American security is obvious.

But if you laid it out on a map, the ISIS camp was much closer to the U.S. border (and a concentration of Americans) a little further west.  The camp’s location was reported to be in Anapra, a suburb of Ciudad Juarez (see maps).  Anapra lies less than two miles from the New Mexico town of Sunland Park.

The U.S. border fence – part of the 654 miles of it (covering about a third of the 1,954-mile border) – runs between the two towns.  For a stretch of about a mile, the border fence is right at the northern edge of Anapra.  I verified through local and social media sources that in this area, the fence is basically at the edge of some Anapra residents’ back lots.

In the April 2015 post linked above, I wrote about how designated “wilderness” areas in southeastern New Mexico were aiding illegal border crossers, including jihadis – who had a known presence as early as 2010 in and around the small New Mexican town of Anthony.  The restrictions in the wilderness areas, some affected by President Obama’s more recent designations of adjacent “monument” areas, made it harder for the Border Patrol to maintain surveillance.

When concerns were raised about this by CBP and local law enforcement, the standard response of administration officials was that the border area in question was a low-traffic, low-threat area, and it was thus not a priority to overcome the difficulties of surveillance there, under the wilderness-area restrictions.

(For public consumption, wilderness-area restrictions are always depicted as “overcome-able,” and thus no big deal, because there is a process for waiving or otherwise working with them.  But in practice, excuses for not overcoming the restrictions typically outweighed the priority of border security in the Obama administration.)

In any case, it was a fairly straight shot from the Mexican border town of Anapra to Anthony, NM — with a slight arc to the west if the goal is to avoid Texas.  (See third map.)  The designated wilderness areas, covering the mountains with dominating vistas, flanked the nominal direct pathway immediately on either side. (Fourth map; “Map 5.”)  These mountain areas would be where the Border Patrol (or the sheriff, for that matter) would want to have maximum freedom to roam for surveillance.

In March 2017, we get a new piece of information from a GAO report.  Terence P. Jeffrey writes at CNSNews that in the period 2010-2015, some 9,287 holes were cut in the U.S. border fence with Mexico.  Most of the holes were cut in older sections of the fence:

And the fencing in Sunland Park, NM, versus the fencing in El Paso, made such a dramatic difference in the number of cuts that this instance was used as an illustration of the results for security.  Emphasis added:

The report describes how the Border Patrol on the ground in the El Paso Sector tried for seven years to get DHS to approve replacing the “compromised” fencing in Sunland Park, New Mexico—which is right across the state line from El Paso, Texas.

Because the fence in Sunland was not replaced, illegal entrants deterred from crossing in El Paso–where there was a good border fence–could simply move to the West to Sunland and cross there.

“El Paso sector officials,” says the report, “stated that while the Sunland Park, New Mexico, area of operations has the greatest amount of illegal activity in the El Paso sector, the condition of the primary legacy pedestrian fencing does not achieve its intended purpose of slowing the progress of illegal entrants.”

Note that the Sunland Park fence replacement project is not an Obama administration effort.  It was actually provided for in the 2006 Secure Fence Act, and finally approved for execution in 2015.  According to NBC 9 in El Paso, this is the reason it took so long:

The fence construction is just now starting because fences were built in order of priority.

An AP photo posted on 27 February 2017 shows work having barely begun on a section of the new, more formidable border fence between Sunland Park and Anapra.  Another section of it – the total replacement length is 2.5 miles – appears in the Reuters image here to have been completed by early January 2017.

We can hope that strengthening the fence between Sunland Park and Anapra will be effective.  We’ll see what happens with President Trump’s plan for a wall.  In the meantime, jihadis of various stripes, including ISIS operatives from the camp less than a mile from the compromised fence, have had years to enter the U.S. by this long-vulnerable route, so we can’t know how many of them there are inside the country now.

To protect free speech and jobs, the EEOC’s budget should be cut
Next Post
Now Pelosi has to ‘clarify’ her own claim to have not met Russian ambassador – whom she met in 2010 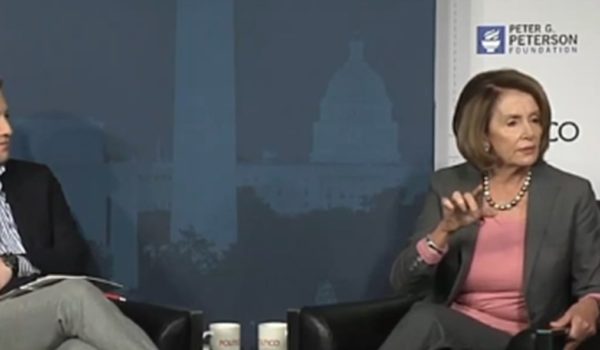