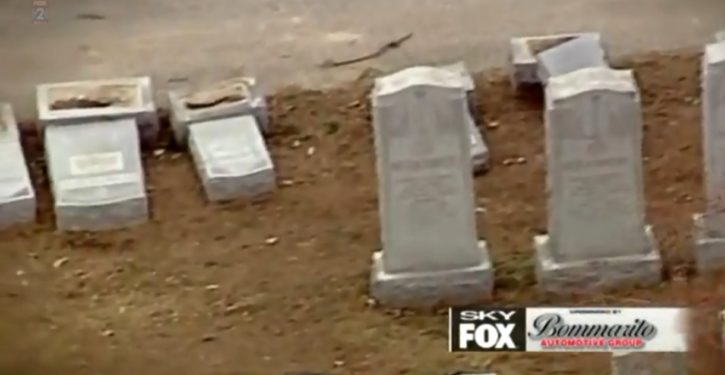 In the last couple of weeks, an apparently coordinated series of threats and vandalism attacks has erupted against Jewish schools, community centers, and cemeteries across America.

It looks coordinated because the same methods are cropping up, in dozens of different cases in cities around the country.  If America has seen a wave of attacks like this in my lifetime, I don’t recall it and can’t find evidence of it.

The coordinated nature of it is too slick and pervasive for it to come off as the grassroots effort of usual-suspect anti-Semites.  Moreover, if it were such groups (neo-Nazis, white supremacists, hangers-on of Farrakhan’s Nation of Islam), the police would almost certainly have fingered them by now.  The cops know where to find these people.

The fact that law enforcement hasn’t identified the perpetrators is a big “tell” here.  It tells me this is a suspicious development, not legitimate evidence of a spontaneous wave of anti-Jewish crimes.

The mainstream media and other left-wing voices have jumped on the trend as if it is such evidence, however.  And they’re illegitimately blaming President Trump.

I’m laying all this out because it’s important to distinguish between, on the one hand, buying this attack wave hook, line, and sinker, so you can blame Trump, and on the other hand, pointing out that the attack wave needs to be addressed, and sharply.

Trump’s opponents are being cynically opportunistic.  Shame on them.

But real people are suffering real hurts from this attack wave, starting with frightened children having to flee their school buildings and stand outside them for hours, wondering if someone really is trying to kill them.  The situation needs leadership from the front.  There’s only one POTUS, and that POTUS is the one who needs to get in front of this.

It’s not politics; it’s leadership, to make a big deal of this – because that’s what it is – and come down hard on it.  It’s good that the FBI is investigating.  Besides visibly calling governors and asking them what they’re doing, and what help they need, Trump himself should be glowering at the camera and telling the perps they’ve already lost this one, and they’re going to be found and punished. This one demands more than a tweet, and a few elliptical or formulaic responses to MSM questions.  If the MSM won’t give Trump air time directly, put out a video via Twitter.

Talk about it, at the very least, in tonight’s address to Congress.  And the 1970s-speak “combating hatred” business isn’t good enough.  American ears don’t even hear those bromides anymore.  This isn’t about singing songs of unity against hatred.  It’s about stopping this in its tracks.

Vice President Pence visiting the Jewish cemetery in Missouri was great, but empathy and rake-wielding are not how you smack this stuff down.  Whoever is behind this, it’s an attack on the social fabric of America.  It’s an attempt to sow fear, doubt, and division; to set us all at odds with each other, calling up old terrors and launching a cycle of cheap blame – by exploiting, with conscienceless cynicism, the genuine concerns Jewish people have had to live with for centuries, sometimes even in America.

I get that this looks like an organized political attack.  We don’t know that for sure, any more than we know that it’s being done by actual Nazis.  It’s too early to speculate on who has done this.  The president needs to exercise judgment about whose bait he rises to, and how he characterizes what’s going on.  He doesn’t have the latitude the rest of us do to be stupidly one-dimensional about this, and just make easy assumptions.

But whatever the truth in that regard, this wave is hurting Americans, making them feel unsafe in their daily lives, and suspicious of each other.  It can’t be left to fester, regardless of who’s behind it.  If you don’t want to be whipsawed by someone else’s narrative, frame one of your own.  Since we don’t know who’s doing this, the president is the guy who can shift the narrative from “hatred is just awful” to “we’re not going to stand for this, and we’re coming for you, jackwagons.”

Exposure to the parching glare of sunlight is exactly what is needed.  Jewish community leaders tend to propose kindly-support/solidarity responses (e.g., dignitaries visiting synagogues or Jewish centers), and more power to them.  Do that, for sure.  But as a gnarly old WASP with bagpipes and cutlasses at my back, I have no qualms about saying this needs to be walloped broadside and sunk.  It can take any America-bashing political motives with it to the bottom of the sea.

*UPDATE*: Trump addressed these attacks in his address to Congress Tuesday night.  I thought he struck the right note by emphasizing Americans’ unity in rejecting such behavior.  The speech was a time for affirming that in a positive way.  There is still pragmatic law-and-order leadership to exercise, but I believe he hit the right note in his speech, and was glad to see it.  Below is my brief commentary on the passage in the speech:

Almost the first words out of his mouth were about the anti-Semitic attacks of the last few weeks, and the appalling shooting of immigrants in Kansas City.  He rightly emphasized that Americans are united in repudiating such attacks.  He’s right.  We are not a people divided in that regard.  It’s not leaderly to rebuke the people obliquely for ominous sentiments they don’t even have.  The leaderly thing to do is to speak their unity back to them.

‘He wowed us’: Can we expect rave notices like this after Trump’s joint address to Congress?
Next Post
EEOC: ‘Reasonable person’ would be traumatized by single insensitive email