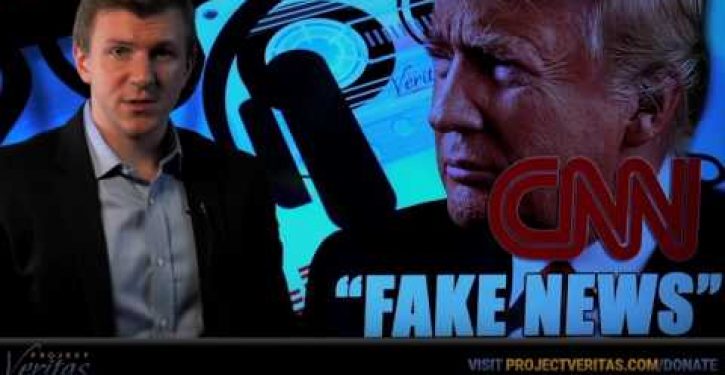 At his site, Project Veritas, O’Keefe reveals that he has gathered 119 hours of raw audio, which is to be presented  in a WikiLeaks style dump.

The audio was secretly recorded in 2009 by an anonymous source inside CNN’s Atlanta headquarters who we are identifying as Miss X. The tapes contain soundbites from current and previous CNN employees Joe Sterling, Arthur Brice, and Nicky Robertson, as well as numerous others. Project Veritas is also offering a $10,000 award for content that exposes media malfeasance. The tapes show CNN’s misrepresentation of polling data:

Miss X: “I read a CNN poll that was taken on June 26 and 28th, and I know that the hearing for the case, the fire fighters case was on the 29th, so the poll was done right before it, and those are still the poll results we’re reporting, so I asked someone in DC who does the poll results about why we hadn’t updated it, and said there were a few newer polls from last week and the week before and there’s CBS news polls and a Rasmussen poll, and he said we don’t use Rasmussen, and I said does CNN plan to do another poll if we’re only using that. He said we’re not going to be doing another poll, those are the results we’ll be using. So I don’t see how that’s reporting all sides because that poll said hold for release until Friday the 10th.”

Arthur Brice: “Who did you talk with?”

Arthur Brice: “Yeah, he’s your director. Yeah, he’s pretty high up in the food chain. I agree. I think it’s dishonest to use outdated information if new information shows something that is in variance with what you’re reporting. It’s just, it’s dishonest.”

This initial release runs just shy of eight minutes, and in it O’Keefe makes an appeal to listeners. That includes you, the readers. He explains:

We don’t have the time our manpower to go through all the tapes. So we’d like you to go through the tapes for us…. [L]isten to them. Transcribe them. See what you can discover.