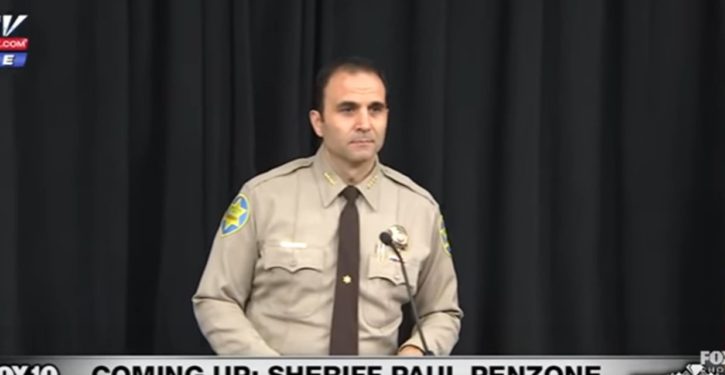 Back during the run-up to the November 2016 election, there was a flurry of articles about the money George Soros was putting into “reforming” America’s law enforcement and justice system at the state and local level.  His method was funding PACs and other groups supporting progressive candidates for district attorney and sheriff jobs around the country – and opposing candidates who didn’t explicitly favor a progressive agenda.

In all, Soros reportedly spent about $11 million on local district attorney races in 2016.  In addition to that total, he spent $2 million on probably the nation’s highest-profile county sheriff’s race: in Maricopa County, Arizona, where “Sheriff Joe” Arpaio faced challenger Paul Penzone.  Penzone had lost to Arpaio in 2012, but in 2016, he defeated Arpaio’s bid for a seventh term.

Penzone gratified progressive supporters in January by referring to illegal migrants as “guests.”  He has gratified them further this week by announcing that Maricopa County will no longer honor federal “detainers” for illegals whom the county decides it doesn’t need to hold.

Basically, this means that the county will take no positive steps to ensure that individuals whom Immigration and Customs Enforcement (ICE) wants to pick up are turned over.  Maricopa County will simply release them, if the county has no reason to hold them.  It’s ICE’s problem to keep up with that.

This policy doesn’t differ meaningfully from the San Francisco policy that got recidivist felon Francisco Sanchez released from jail in 2015 – in spite of an ICE detainer request – shortly before the 45-year-old illegal murdered Kathryn Steinle.

That said, Penzone may want to take note of a few things, such as the aftermath of the Steinle murder case.  The San Francisco sheriff who was zealously enforcing the no-detainer policy in 2015, Ross Mirkarimi, lost by a landslide in his reelection bid that November – an outcome widely attributed to the non-cooperation stance with federal authorities.

Moreover, Penzone’s non-cooperation posture, which is basically the definition of a “sanctuary city,” was effectively rejected the day before his announcement by the Phoenix city council.  (Phoenix is the 800-pound urban gorilla in Maricopa County.)  Activists have long been pressing the council for a vote to make Phoenix a sanctuary city, and reportedly hoped the day was finally at hand on Thursday, 16 February.  But the Democratic-majority council declined to even hold a vote.  The Democratic leadership pointed out that state law – the 2010 Arizona law known as Senate Bill 1070 – prohibits any such proclamations.

The Phoenix city council presumably has in mind, at least partly, the vow of the Trump administration to withhold federal funds from self-designated sanctuary cities.  Miami has thought better of its non-cooperation policy in the last few weeks, as have other cities.

San Francisco filed suit at the end of January to prevent the Trump administration from withholding funds at its discretion.  That gambit is doomed to fail – although, as commentators have noted, it is amusing to see Democrats suddenly embracing the themes of the Civil War, Reconstruction, and Southern segregation again.  I.e., proclaiming that local Democrat-governed cities or states should have the privilege of rejecting federal authority, but still receive the benefits of membership in the Union.

Paul Penzone’s future in his new job is by no means guaranteed.  Soros got the sheriff he wanted, but it’s a good question how much that will mean.

In the short run, it will generate more problems.  For some years, Arizona was the entry point for nearly half of the illegals coming into the country.  Although that is thought to have changed somewhat since Obama cut back on border enforcement overall, suspending active detainer cooperation with federal authorities over the very large territory administered by the Maricopa County Sheriff will still take its toll.

But in the long run, Penzone’s defiance may very well be overtaken by events over which neither he nor George Soros has control.

Remember when Obama was deporting illegals in record numbers? Good times.
Next Post
Point of order: No apparent reason why FBI was investigating Mike Flynn