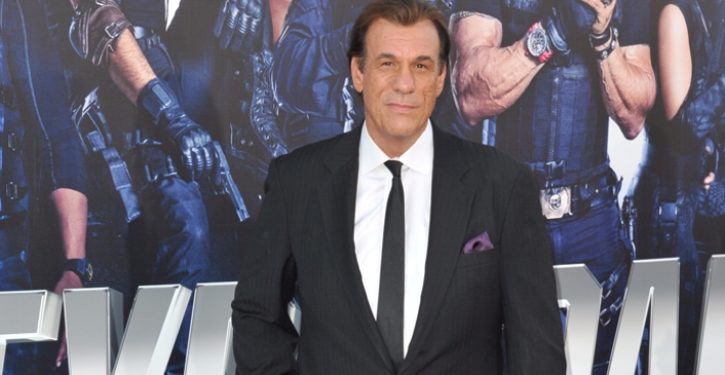 Actor Robert Davi (who played one of the greatest movie villains of all-time in “The Goonies”) just penned a scathing open letter to his Hollywood colleagues. The letter appeared first at Breitbart but has since been shared across dozens of websites, blogs, and emails. In it, Davi wonders why it is that the liberal elite who populate Hollywood and spend their time condescending to the rest of America on life and morality don’t seem to be practicing what they preach.

Davi begins by explaining that he is concerned with the violent response to almost anything President Trump says or does. He then explains that he’s particularly troubled by the response to the President’s recent travel “pause” on migrants from seven Muslim-majority nations. Davi explains that he supports immigration and that he himself is the son of immigrants who came “legally” to the United States to give their children the opportunity to have better lives than they did.

However, he believes that illegal immigration is wrong and should be prosecuted as the crime it is. He reminds his fellow Hollywood stars that there are thousands of illegal immigrants currently living in the U.S. whose nations won’t allow them to be repatriated because they are criminals. He also mentions that many of his liberal colleagues have spoken out in support of the millions of illegal immigrants currently living in our nation, and he urges them to act on their rhetoric and give these hordes the asylum they seek … by inviting them into their own homes.

Here is what I consider the money portion of the letter:

It is now in this spirit that I make an appeal to all in Hollywood and the media for us to use the Oscars to take a stand for the entire world to see and hear. It is time for Hollywood to lead the way.

I propose that Meryl Steep, Chelsea Handler, Richard Gere, Robert DeNiro, Christoph Waltz and others lead an Oscar first: let’s do away with the rules, barriers, and tickets to the Oscars and after-parties, such as the swanky Vanity Fair party or the Weinsteins’ star-studded affair. I ask all migrants, all illegal immigrant criminals and all un-vetted refugees to converge on Hollywood to come to the Oscars and all the after-parties, even those held at the mansions or the Chateau Marmont or anywhere else. After all, we in the Hollywood community want to show all Islamic extremists that we have love in our hearts — and what better way to do that than by inviting them along on our most important night?

It’s time the walls and electronic security gates come down. There are roughly 3,600 seats to the Oscars; we should have at least 2,500 seats reserved for illegal aliens, refugees and migrants, or maybe even more. For those celebrities skipping the ceremony, each should invite at least 100 illegal aliens, refugees or migrants to come to their home to watch the Oscars with them. The Academy and the Vanity Fair people should also get the 150 criminals who have recently been deported from Los Angeles and bring them to the show as honored guests.

Davi proceeds to turn his rhetorical attack on these liberal hypocrites by wondering why they were silent when President Obama did the same thing that Trump is currently doing. He wonders if Hollywood was racist, and if not, why they hold their tongues when Christians are slaughtered but protest when a Muslim is denied entry to our nation.