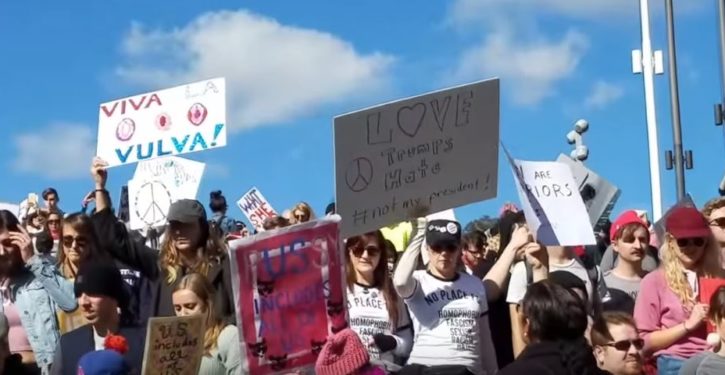 There is little doubt that history will inextricably link Donald Trump’s inauguration this past Friday with the women’s march on Washington and sister marches around the nation and the world on Saturday.

According to the New York Times, the Washington march attracted estimates of 470,000, almost three times the size of the official inaugural crowd. But both crowds were equal in their pro and anti-Trump passion.

Sunday, in response to the march, Trump tweeted:

Watched protests yesterday but was under the impression that we just had an election! Why didn't these people vote? Celebs hurt cause badly.

Trump’s voting question was valid given that “these people,” according to the Washington Post, and obvious from every crowd photo, were mostly “female and white.” And, as witnessed by the signs they carried, Washington Examiner’s Byron York aptly called the march, “Scenes From a Pussy Riot.”

Yes, “we just had an election.” However, if Hillary Clinton had won the white female vote in key battleground states, the marchers would have celebrated at her inauguration rather than protesting the next day.

Using CNN exit poll data updated on November 23, 2016, let’s examine the white female vote in the five largest electoral states lost by Clinton. Those states are Florida, Pennsylvania, Ohio, Michigan, and North Carolina. Considering that Clinton’s electoral vote total was 232 to Trump’s 306, if Clinton had won Florida and one of the four other states, she would have become president.

Warning: the following facts are painful and inconvenient to Saturday’s marchers.

But white women comprised the largest voting block at 33% of the total vote, and Clinton won only 36% compared to 60% for Trump. Therefore it is safe to say that some of the marchers’ vulgar signs should have been directed at white Florida women.

In Florida, white men were the second largest voting block at 29%. Trump won them by 67% compared to 28% for Clinton. Nationally, that story was well reported with Trump winning white men by 62% to Clinton’s 31.

Trump won Pennsylvania by 48.8% compared to Clinton’s 47.6%. The raw vote was 2.9 million for Trump and 2.8 million for Clinton. Therefore, if white women had turned out for Clinton by an increase of one or two percentage points, Clinton could have closed the gap and won the state’s coveted 20 electoral votes.

White females were the largest voting block at 42%. Clinton won only 39% compared to Trump’s 56%.

White women were the largest voter group at 37%, and Clinton won exactly that same 37%. However, Trump had a “yuge” margin of victory with white women winning 60%.

So where were the protest signs slamming white women from North Carolina?

Now you know the truth behind Trump’s tweet that “we just had an election,” a fact largely ignored on Saturday and lost in that sea of mostly white women’s faces.

Therefore, angry white women with a great majority carrying signs about their genitalia were foiled by their sisters in five battleground states who voted for Trump’s brand of change rather than awarding Clinton with the status quo of Obama’s “third term.”

But the question remains, “Can these marchers handle the truth?

Poll: Fauxcahontas not a sure thing for re-election in 2018
Next Post
Trump adviser Kellyanne Conway allegedly punched a man in the face at President Trump’s inaugural ball