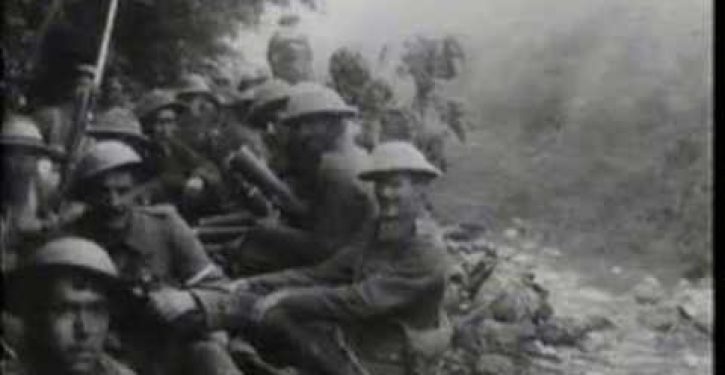 Ninety-eight years ago, in the eleventh hour of the eleventh day of the eleventh month, the armistice was proclaimed that ended the terrible fighting in World War I.  A war that had erupted in large part because Europe’s political leaders, a century on from the Napoleonic conflicts, were accustomed to war remaining limited, produced some of the bloodiest battles ever fought. The six-month battle of the Somme in 1916 took the lives of an unimaginable 1.5 million French, German, and British soldiers – without either side achieving sustainable penetration of the line of confrontation, or any operational victory. WWI was the most tactically and politically frustrating of wars, admitting little maneuver, little jockeying for advantage, and no enduring significance to victory.

We never do see it coming, at least not in the outlines visible in hindsight.  War was in the air in 1914, but no one foresaw what that war would actually turn into.  A quarter century later Europeans were as steeped in complacent certainties as ever, even after Germany remilitarized the Rhineland, occupied the Sudetenland, and invaded Austria.  As Clare Booth Luce recorded in her incandescent Europe in the Spring, the political class of France, England, and the Low Countries spent the “Phony War” period of late 1939 and early 1940 reassuring itself that Hitler wasn’t going to invade them.  Nor were Americans any more farsighted:  our Congress came within a vote of ending the draft in 1940, so certain was it that whatever stew they managed to cook up over there in Europe, we in America could stay out of it, if FDR’s hands were properly tied.

Unfinished business is all around us today, as nations jockey against a precarious international order and America herself focuses inward.  It has never been wise to bet on the commitment of men or nations to peace, and we have no reason to do so in 2015.  Veterans Day is a day significant in this geopolitical sense, because of its origins in America’s first participation in a campaign to restore a global order. Our president at the time called it fighting a “war to end all wars.” It wasn’t, of course; war has not ended.  We have had to keep going back again and again, and the features of WWI have dictated where and when, and why and how.

We are 98 years on now from that November day in 1918 that marked an agreement of combatants to unfinished business, and launched the near-century in which we have tried to finish it.  The unforeseen that is always around the next corner makes these lines from John McCrae’s 1915 poem “In Flanders Fields” particularly poignant:

Do they sleep, the Dead in Flanders fields?  Have we who caught the torch kept faith with them?  We have spent 98 years trying to figure that out.  We are likely to spend at least 98 more.  On Veterans Day, we can take a moment to honor the veterans who have carried that torch, giving the reality of flesh, blood, and spirit to our often confused, disputatious, dilatory, and halting attempts to keep faith with those who lie in Flanders fields.

Bonus.  One hundred years ago today, President Woodrow Wilson had just been reelected, the U.S. was still months away from entering the war, and the horrific Battle of the Somme was still underway.  Fought along the valley of the Somme River in northern France, the battle lasted from 1 July to 18 November 1916, and inflicted combined casualties of over 1.1 million fighting men.  By comparison, in the entire American Civil War, the bloodiest in our history, we lost about 650,000.

It is food for reflection to note that John McCrae’s poem was written before the Battle of the Somme.  It is a measure of how appalling World War I was to the conscience that each year brought extended battles of stunning shock and horror.  By 1915, the First Battle of the Marne alone had already taken more than 510,000 lives.  In 1917, the Third Battle of Ypres would see another 585,000 casualties.  Together, the final battles of 1918 would claim another 1.18 million.

Here, courtesy of user killtron on YouTube, is contemporary footage of the Battle of the Somme in 1916.

The Unknown Soldier of World War I returned to the United States on cruiser USS Olympia on 9 November 1921.  He was laid out in the rotunda of the U.S. Capitol until 11 November 1921, when he was interred at Arlington National Cemetery.  A new tomb for the Unknown was put in place by Congress in 1931.  Unknown Soldiers from World War II, Korea, and Vietnam have since been interred in the Tomb of the Unknown Soldier.  Since 2 July 1937, the tomb has been guarded by a military sentinel every moment of every day.