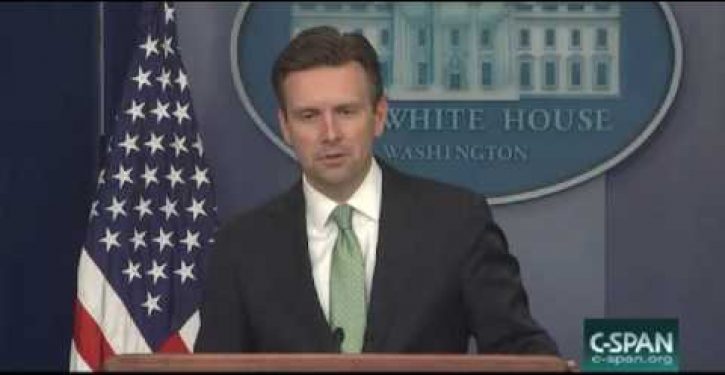 One of Barack Obama’s last uses of his pen (you know, that one that’s a companion to his phone) could conceivably be to pardon his former secretary of state, Hillary Clinton.

But, you may be saying, she hasn’t been charged with a crime. Incredibly, she doesn’t have to have been for the president to issue a pardon. According to Samuel T. Morison, an attorney who specializes in pardons, the president has broad executive authority in this area:

The Constitution says the president can pardon ‘offenses’ against the U.S., not ‘convictions.’ The only constraint is that he can’t pardon someone in advance of committing the offense.

One unanswered question in the ongoing Clinton drama is whether Obama will pardon her. The question was White House Press Secretary Josh Earnest yesterday during the daily press briefing. Here is what he said (the transcript follows):

Well, as you know, the President has offered clemency to a substantial number of Americans who were previously serving time in federal prisons, and we didn’t talk in advance about the President’s plans to offer clemency to any of those individuals.

The reference was to commutations of prison sentences Obama signed, which this year alone came to 688. It is a point in which the president has expressed great pride.

Whether he decides to let Clinton off the hook depends on how much of a grudge he carries against her and her former president husband, who has been less than charitable to Obama throughout his presidency and especially lately. On Monday, Bill Clinton said at a fundraiser for his wife’s campaign that Obama’s policies have left working class whites hopeless. And just last month, Bubba called the soon-to-be-repealed Obamacare “the craziest thing in the world.”

On the other hand, the investigation to date into the Clintons’s unsecured homebrew email server have revealed that Obama, despite earlier protestations to the contrary, received official email from her private account. He even devised a pseudonym for himself so the correspondences would be protected. Further probes might implicate him even more, prompting him to grant her clemency.

Cartoon of the Day: Catching up
Next Post
The five stages of ‘Trump grief’ for pop star and Trump hater Miley Cyrus