[Ed. – As Americans practice saying the once-unfathomable words ‘President Trump,’ we thought it be instructive to look back at an article J.E. Dyer published on Aug. 31, 2015 about Donald Trump’s remarkable durability as a poltical candidate. Enjoy.]

Boy, was I wrong about Donald Trump.

Six weeks ago, I proclaimed that Trump had effectively ended his candidacy by trash-talking about John McCain’s war record.  My point wasn’t that most people have a sentimental attachment to any particular narrative about McCain; it was that it’s so gratuitous and unleaderly to comment in that way at all, and people would feel instinctive revulsion against it.

I was wrong in thinking Trump had gone too far for the voters.  A critical mass of the people is not having its reactions dictated by convention today.  Some of the commenters at that post of mine said they thought Trump would survive the flap just fine – and they were right.

No one can quite figure out what the deal is with Trump’s staying power.  But it is interesting, in light of what I’ll unveil here in a few paragraphs, what his candidacy is revealing to us about our country.

The biggest thing I see emerging clearly, as Trump rises in the polls, is what an arrogant, dismissive, even spiteful attitude many of our thought leaders and political professionals have about the people.

These leaders and political professionals seem to have no capacity for self-examination: for questioning their own premises and assumptions.  At a time when they should be asking why the people are responding so differently to political stimuli, they are asking instead why the people are so stupid.

Actually, the people aren’t stupid.  The people may not be managing to express nuanced, fully-formed views on closely defined topics.  It’s hard to do that with the blunt tool of a vote.  But the people have a very clear view of what’s going wrong in their country, because they have to live with it every day.  And from the people’s perspective, the conventions of politics-as-usual – not the constraints of our Constitution, but the conventions of the current political consensus – are the problem.

The people are right about that.

Many voters – a growing number, I think – are looking for the candidate whom they can best express that by supporting.  Although there are particular arguments for candidates like Carson, Cruz, Fiorina, and Paul, there’s one stand-out reason why Trump keeps topping the list.

He overrides the attempts of the media to shape the debate.  Without the Trump candidacy, I don’t think we would be seeing clearly how sick many voters are of having the terms of public debate defined against the people’s interests – using the full arsenal of political correctness and deceptive euphemism – before the back-and-forth even begins.

Without Trump, we certainly wouldn’t see the practice of prejudicial definition thrown into such strong relief, while it’s happening.  Most politicians simply cooperate with it – or at least are unable to take the step back from it that reveals it for what it is.  Trump, however, has that gift.

Trump offers something voters haven’t had for a long time: a way to express both (a) their dissatisfaction with the whole political consensus that has delivered our present circumstances, and (b) their specific approval of a candidate who fearlessly and effectively rejects the “narrative control” that the media, and our political leaders on both sides of the aisle, are accustomed to exerting.

This is why prospective voters continue to tolerate breaches of ordinary decorum from Trump.  Because when the republic is facing an existential emergency, it just doesn’t matter what Trump tweets about Megyn Kelly.

It’s the recognition that America faces an emergency that is being written for us on a virtual Jumbo Tron in yard-high letters.  That’s what Trump supporters are saying: not just “We are in an emergency,” but “Listen to us!  Wake up.  Don’t you see it?  Show us some sign that you recognize the emergency!”

Without the Trump candidacy, voters would have no way to express that with the urgency they’re displaying.

I have wondered in recent weeks why candidates with strong positions, and records of standing up under difficult circumstances, haven’t been getting more traction.  I have in mind, in their different ways, Ted Cruz, Rick Perry, and Scott Walker.  I think part of the difficulty for Perry and Walker is that they have both come across as mealy-mouthed on the rule-of-law aspect of illegal immigration.

But I also think that in general, there is too much wrong in America, in 2015, for the voters to be ready to simply express political preferences in a conventional way.  A tidy campaign process for the Republican Party just isn’t the people’s priority this time around.

The candidacy of Donald Trump is a vehicle for clarifying that.  That’s why I want to call to your attention a fascinating post written in early July for Charisma Magazine, a magazine for evangelical Christians.  In it, the founder of a ministry in Lakeland, Florida says he received a sort of “prophecy,” several weeks before his post was written (i.e., apparently in late May or June), that God intended to use Trump as a “trumpet” to reveal truths to the American people.

I was in a time of prayer several weeks ago when God began to speak to me concerning the destiny of Donald Trump in America. The Holy Spirit spoke to me and said, “Trump shall become My trumpet to the American people, for he possesses qualities that are even hard to find in My people these days. Trump does not fear man nor will he allow deception and lies to go unnoticed. I am going to use him to expose darkness and perversion in America like never before, but you must understand that he is like a bull in a china closet. Many will want to throw him away because he will disturb their sense of peace and tranquility, but you must listen through the bantering to discover the truth that I will speak through him. I will use the wealth that I have given him to expose and launch investigations searching for the truth. Just as I raised up Cyrus to fulfill My purposes and plans, so have I raised up Trump to fulfill my purposes and plans prior to the 2016 election. You must listen to the trumpet very closely for he will sound the alarm and many will be blessed because of his compassion and mercy. Though many see the outward pride and arrogance, I have given him the tender heart of a father that wants to lend a helping hand to the poor and the needy, to the foreigner and the stranger.“

The minister, Jeremiah Johnson, got some serious pushback from fellow Christians on this.  A WND piece that ran in LU’s Web Crawler collated some of the reactions, as well as Johnson’s subsequent response on Facebook. His response is somewhat lengthy; here’s an excerpt:

What the article does NOT say:

What the article does say:

1. Donald Trump is going to be used by God as a trumpet in America to expose darkness and perversion.
2. Christians must look past/through his bantering and listen for the truth that God is going to make known through him.
3. God can use anyone He chooses to fulfill His purposes and plans in the earth. … Donald Trump among many. …

Some Christians appear to be absolutely infuriated at the thought or prophetic word that God is going to use Donald Trump as a Trumpet to expose darkness and bring truth because of His moral background and political views. Perhaps God not being limited, subjected, and dependent to who human beings think He should use for His glory reveals their own issues with God, not a prophetic word.

We report, you decide.  The Trump phenomenon continues to defy expectations, and with each passing week seems to cut closer to the bone, and right through the sinew, of America’s long-running, post-FDR political consensus.

I have other reasons for thinking that we have no way, today, to foresee what the 2016 election will really be about.  I suspect that almost everything is going to look different to us a year from now.  More than likely, our priorities will have changed, because our world will have changed.  As far as we can foresee today, this will have nothing to do with Donald Trump, who won’t be in a position to make any big decisions for America or the world during this period.

But complacency like that of our current political class is the most deadly attitude to face our future with.  Whether Trump has been sent to act as a “trumpet” or not, he’s certainly having the effect of brass sounding from out of nowhere – grating, perhaps; arresting our attention; and giving us the disquieting sense that something is being heralded, even if we can’t say exactly what. 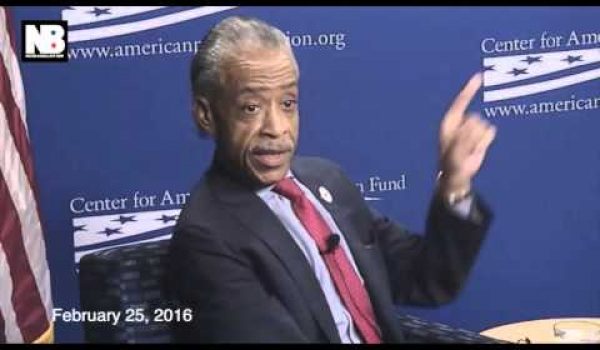 Will there now be a mass exodus of celebs who threatened to leave the U.S. if Trump won?
Next Post
Civility? Protesters break windows, start fires in Oakland in response to Trump victory