The night before what will probably be the most freighted election of our lives, the well-worn political litany of the last year has no savor for me.

I could go through all the reasons why it will be far worse for America if Hillary Clinton is elected.  But you know what they are.

I could go through the reasons why Trump is imperfect – in some ways, deeply flawed as a repository of people’s political hopes – but wouldn’t do the damage Hillary would, and is likely to do some good.

But I think most readers here don’t need to go through those points one more time.

In a sense, the moving finger has writ, and is already moving on.  There will be an aftermath to the election tomorrow, and we are about to face it – whatever “it” is.

I don’t pretend to know the particulars of what will happen.  For the little that it’s worth, I think Trump is going to win.  I think the GOP will keep the House, and has a slightly better than even chance of keeping the Senate.

But the more important sense in my mind is a certainty – which regular readers know I’ve had for a long time – that regardless of which path America takes, it will be a path forward.  To our old, pre-2009 reality, there is no going back.

I know that many enthusiastic Trump supporters are not ready to hear this, and I wish them only peace and good outcomes.  But Trump isn’t going to “right” everything for us.  I expect it to be a relief every day that he, and not Hillary, is in the Oval Office.  But he cannot fix what’s unfixable.  We have some tremendous upheavals ahead of us.  It’s quite possible he will cause some of them.

Not everyone is ready to hear this, either, and here I am speaking to the maybe 30-40% of people who will “get” it.  I know they’re out there.  I am encouraged, and even – on good days – enthusiastic, and verging on wonder, when I survey all the things that are breaking around us.  Because the breaking of those things is a sign not of cataclysm but of opportunity.

In a sense, being fixated on the 2016 election is already looking in the rearview mirror.  One way or another, we are headed into a future that will be discontinuous with our dysfunctional past.  The conditions of our world today represent the greatest opportunity we have had for hundreds of years to reassess bad mindsets and patterns, and decide against them.

We have reached the point at which – for the great majority of people – the existing “order” is not worth making sacrifices for any longer.  Indeed, we disagree profoundly among ourselves as to what the existing “order” is: how it’s defined, what it consists of.  A small minority of people says that there’s “order” when they are able to impose their will on others.  For the others, that doesn’t look like “order” anymore – in a very literal sense.  It looks like increasingly unsafe streets and upended lives; like unequal treatment by dishonest authorities, and the loss of opportunity and rights.

No one elected tomorrow can put back together what has been broken here.  That’s OK.

For Trump supporters, I urge you to understand that not everyone who has reservations about Trump is full of unreasoning hatred toward him.  I will be relieved if he wins tomorrow.  I’ll feel a lot less like it will take a revolution for America to get out of the spot we’re in.

But for the many people I know are out there who still see trouble ahead, I want to say this.  Yes, I see it too.  Don’t despair.  The future is much bigger than what our eyes can see on 8 November 2016.  Don’t worry that you can see clearly that Trump is not a comprehensive remedy for everything that ails us.  That’s OK.  What’s breaking around us is what has to break, if we are to have the opportunity to re-chart America’s course.

It will still break, if Hillary is elected.  It will just break uglier, and with more sorrow and bloodshed.

If you aren’t already thinking about the changes you would make, if it didn’t seem impossible to beat back the last 50 or 100 years of regulatory progressivism – well, start.  It’s very possible that the world is going to make the conditions of revolution for us in the coming years.  If your eyes don’t see that that is already happening in Europe, I recommend adjusting your vision.

The future is not small, predestined, and closed.  It’s wide open.  And for those with ears to hear, the God Jehovah is still on the throne, and is still about mercy and grace, as a veritable explosion of possibilities for each human life.  We don’t have to be enslaved to an ethic of vengeful “justice” – one that’s always about an unrequitable past.  We are empowered to be about hope and a future.  We can choose life.  I don’t think I’ve ever before had such a powerful, unsettling sense of what it will mean to trust wholly in God.  But I know that we can.

May He bless and keep America.  May freedom, one day, ring loud and true again. 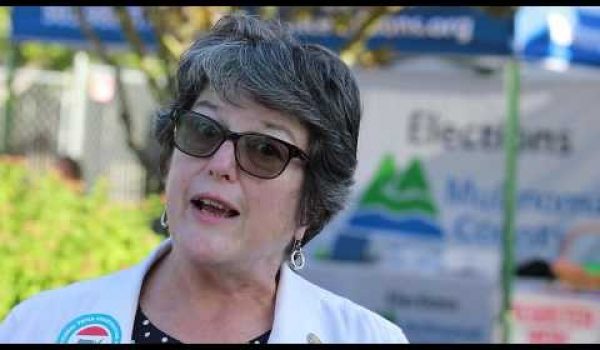 Orwell lives: Oregon sec. of state says GOP effort to get out the vote is ‘voter suppression’
Next Post
Court rejects Dems’ poll-monitoring case against GOP