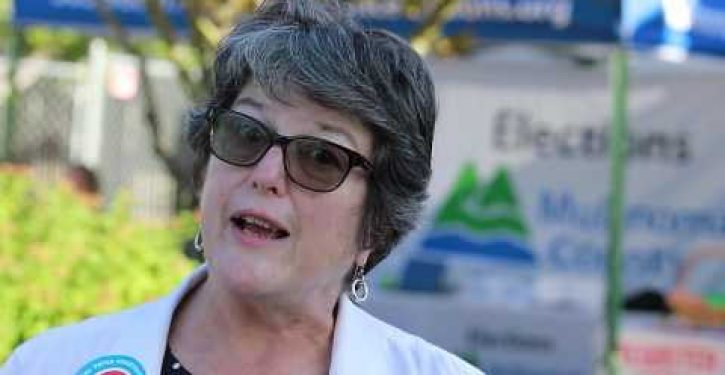 This is an actual case of saying war is peace, or freedom is slavery.

Jeff Reynolds has a full write-up at PJ Media.  He’s a better sport than I am: he develops the Oregon secretary of state’s case, and then goes on to argue against it.

But forget that reactive approach.  The take-away from this situation needs to be stated categorically up-front.  Jeanne Atkins, Democratic secretary of state in Oregon, is misrepresenting what the state GOP is doing, with no gray areas to hide behind and nothing to dispute.

Here’s what happened.  Oregon votes by mail.  You have to keep your registration in an active status to receive a ballot.  So the state GOP went through the voter rolls, identified Republican voters whose status had fallen to “inactive,” and robocalled them to remind them to update their status, so they could vote.

That’s it.  To say anything else about this is to lie.  Reynolds has the full particulars on this, which I assume you will want to verify.  Go right ahead.

Meanwhile, lie is what Atkins did.  She not only misrepresented the GOP’s action — she reportedly asked the state and federal authorities to investigate.

The Eugene Register-Guard reported that “the calls were characterized Friday morning as ‘voter suppression activity’ by Atkins, with election officials unable to determine who was behind them. Atkins called on the Oregon Department of Justice and the U.S. Attorney’s Office to investigate them.”

Of course encouraging Republican voters to vote is not “voter suppression activity.”  Of course not.  Atkins engaged in literal Orwellian doublespeak here, attempting to defame the state Republicans and create the appearance of wrongdoing where there was none.

Reynolds points out that the only specific thing alleged against the Republicans, they demonstrably did not do.  The Oregon Democrats claim that the robocall warned recipients that their votes would not be counted.  But the full text of the robocall’s message, promptly released by the state GOP, says nothing about anyone’s vote not being counted.

Reynolds also notes that local media have now altered their filed stories and removed video clips in which Atkins was shown making her false claims about the GOP robocall.

Several media outlets appear to be assisting in scrubbing the statement by the secretary of State to ignore the robocalls. Multiple local news channels showed the video of her statement to the press in their 10 o’clock or 11 o’clock news on Friday, but in each case, their websites conveniently now have no video to link, and the online story appears to be significantly altered.

I did find one news site that still has a story reflecting what Reynolds found in the initial coverage.  The KEZI story credulously reports that the GOP robocall warned voters “their ballot will not be counted,” and it cites Atkins’s office as calling the robocall a “scam.”  Atkins, according to the report, claimed the GOP was “challenging” voters’ registration status, and called this “voter suppression activity.”

Screen caps are included below, in case KEZI decides to alter its story.  As you can see, the image with the story is captioned “Scam Alert.”

Incidentally, compare the GOP’s robocall reminder for Republican voters to the registration and voting reminder issued in October by…Secretary of State Jeanne Atkins.

Fair-minded people may still think it’s judicious to give at least provisional credence to cooked narratives like Atkins’s about “voter suppression.”  We don’t like to think of what lies beyond, if we and our fellow countrymen on the left really are no longer working from the same playbook.

But I think most conservatives are realizing that the tipping point has been reached.  There is no reciprocity here.  No compunction or fair-mindedness animates the political left.  It doesn’t make you an angry-variety Trumpbot, to decide you don’t need to waste your time anymore giving the benefit of the doubt to left-wing demagogues blasting out progressive talking points that bear no resemblance to truth or reality.  It just makes you sane.

Obamacare is unpopular and ever more costly
Next Post
Election eve: Courage, friends