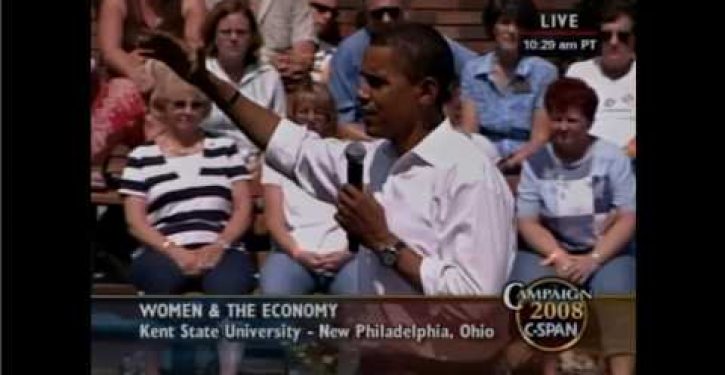 Curse the internet! It has a way of coughing up information at the most inopportune time, especially if you are politician of the holier-than-thou stripe.

Today’s lesson on the perfidy of a global system of data retrieval with a long memory comes from the campaign trail of an election past. The speaker is then-Sen. Barack Obama. He is at a town hall-type event, and a questioner in the asks audience is whether there is a danger of the election being rigged.

Watch and listen. (A transcript of the money portion follows).

I tell you what it helps in Ohio, that we got Democrats in charge of the machines.

I come from Chicago, so I want to be honest, it’s not as if it’s just Republicans who have monkeyed around with elections in the past. Sometimes, Democrats have, too.

Whenever people are in power, they have this tendency to try to, you know, tilt things in their direction.

Appropos of his remarks pertaining to Chicgao and to Democrats “monkeying around with elections,” a story at LU earlier this morning notes that the touch screen voting machines at a polling place in the Chicago suburb of Schaumberg are converting GOP votes to Democratic votes. The explanation? It was a calibration error.

In the meantime, the stories critical of Donald Trump’s talk of a rigged election continue to be cranked out by the liberal machine.

Clinton Foundation employed a now-imprisoned senior member of the Muslim Brotherhood
Next Post
Cartoon of the Day: Wanted, dead or alive