The Left is still trying to come up with a campaign slogan for Hillary Clinton and still failing bigtime. I mean, what do you say about a candidate whose plan for the country begins and ends with getting elected?

If the WikiLeaks emails have demonstrared anything, it’s that Clinton will do or say whatever it takes to get elected. Beyond that, heaven help the LGBT community, the middle class, Hispanics, Millennials, women (especially women!), or any other subset of the electorate that votes for her on the strength of the promises she has made.

Despite numerous hints she has dropped that it’s every man from himself, the devout want desperately to believe. So when their mortal foe, Donald Trump, reacts to yet another gratuitous dig at hime during the third presidential debate by calling Clinton “such a nasty woman,” her base becomes energized. Suddenly, they have the much sought-after slogan for a bumper sticker:

Just one small problem with this. Trump was not dismissing all women as nasty — just Hillary, and much that has been revealed about her during this and her previous run for the White House suggests the shoe fits. Gary Byrne, an ex-Secret Service member who served in the West Wing during the Clinton administration, claims Hillary Clinton called him a four-letter word and hurled a Bible at him, striking him. Another member of the Secret Service told the New York Post earlier this week that members of her security detail hated her so much that they privately snickered after she accidentally fell and broke her arm in 2009. “We sort of got the last laugh,” the agent is quoted as having said. “It was kind of like payback: You’re treating us like sh*t. Hey karma is a bitch! We were smiling to ourselves.”

It’s not just the Secret Service who have found Clinton abusive. The American people as a whole seem to see something in her they don’t like, which explains why her approval ratings are in the red by nearly ten points.

If women in the nation want to self-identify with Clinton and take on some of the imagined burden of having been called nasty, that’s their problem. But when they place blame for it at the feet of Donald Trump, they are not being nasty — just stupid. 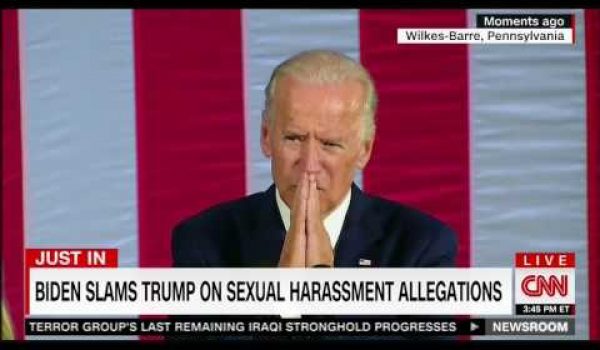 Biden on Trump’s accusers: ‘I wish we were in high school and I could take him behind the gym!’
Next Post
Immigration is expanding the government’s size