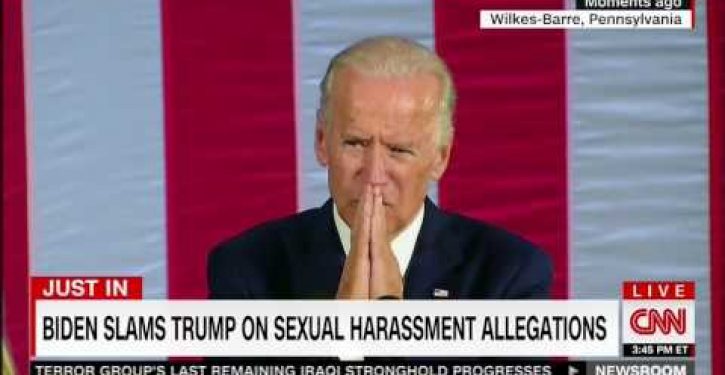 Wow! Who knew crazy Joe Biden was such a badass? In the video below, the man who is a heartbeat away from the president claims, in an artificially indignant rant, and with the prerequisite morally superior Democrat disingenuousness, that he wishes he could take Donald Trump out behind the toolshed (or “gym” in his formulation) and beat the tar out of him for touching women inappropriately.

Touching women inappropriately a subject on which Biden is something of a minor expert, if only because he has been on the delivery end of plenty of unwanted touching.

Unlike with Trump, where the claims are unsubstantiated, Biden’s touchy-feely side has been heavily documented.

Writing at Political Insider, LU contributor Rusty Weiss has a pictorial on the subject, and it is clear from the looks on the faces of many of the female recipients of the Veep’s caresses that these are devoutly unwished for.

Here is a sample. Take particular note of the identity of Biden’s hideously uncomfortbale vicitm in the last photo:

Apart from the silly bravado and hypocrisy behind Biden’s threat, whatever happened to the civility that liberals claim to prize so highly? Was Biden asleep when his boss gave a speech about the need for Americans do desist from threatening each othe with violence?

Bombshell: Server code destroys Donna Brazile’s claim her emails were altered by WikiLeaks
Next Post
Tweet of the Day: Hillary Clinton IS a nasty woman