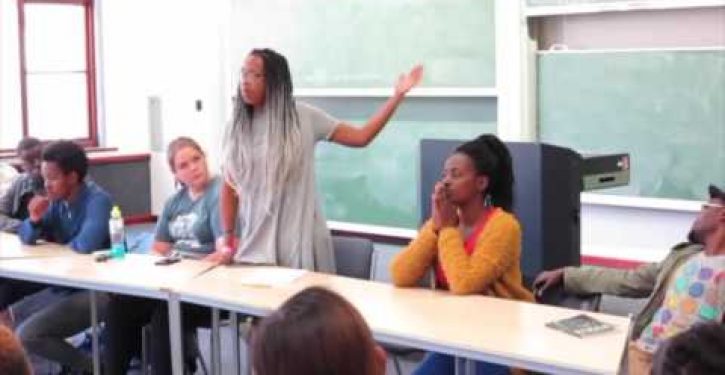 A discussion on science devolved into the truly bizarre this week at the University of Cape Town (UCT).

The meeting of activists and faculty of UCT featured one student saying, “Science as a whole is a product of Western modernity and the whole thing should be scratched off. Especially in Africa.”

The group of students, insisting that science is racist and must be “decolonised,” created the hashtag #ScienceMustFall to describe their “fallist” movement, as they dub it. The student expanded on what “decolonizing” science means, saying:

Decolonising the science would mean doing away with it entirely and starting all over again to deal with how we respond to the environment and how we understand it.

The student also brought up South African witchcraft as an argument against the Western dominance in science.

In front of the gathering, she said:

I have a question for all the science people. There is a place in KZN called Umhlab’uyalingana. They believe that through the magic’ you call it black magic’ they call it witchcraft’ you are able to send lightening to strike someone. Can you explain that scientifically because it’s something that happens?

Some attendees laughed at ths question, with one person declaring that “it’s not true!” After being chastised by another panel member, the person promptly apologized for her microaggression.

This report, by Justin Caruso, was cross-posted by arrangement with the Daily Caller News Foundation.