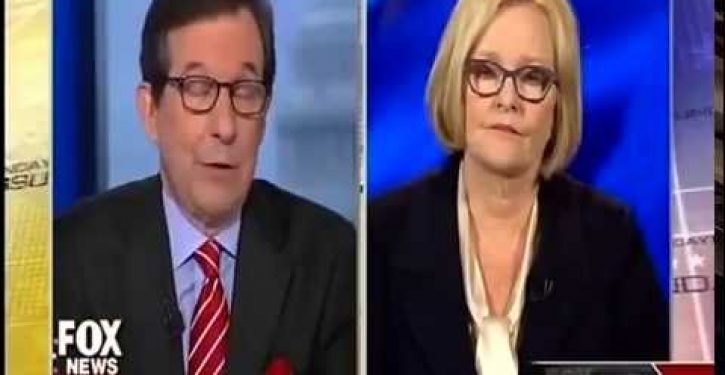 So Hillary Clinton called Monica Lewinsky a “narcissistic loony toon.” So what? And so what if she called Gennifer Flowers “a gold digger” and “the daughter of Willie Horton” — whatever that last dig was supposed to mean. And, yes, Clinton has been calling Kathleen Willey, another of her hubby’s “conquests,” a “bimbo” for the last 19 years. But what of it?

The important thing, Sen. [score]Claire McCaskill[/score] (D., Mo.) told Chris Wallace on “Fox News Sunday,” is all the good Clinton has done for women, which outweighs those ugly labels she applied to the many gals who claimed they were raped, groped, or simply had sex with Bill Clinton.

Here’s the video. A transcript of the money portion follows:

You know, Hillary Clinton may have defended her husband in various situations,but if we want to compare what she has done for women in her life, how she has worked – I mean, when the cameras weren’t rolling, when no one was looking, after a law degree from one of the best schools in the country, she went to work for the Children’s Defense Fund.

Since McCaskill raised the subject of Mrs. Clinton’s work as an attorney helping children, maybe she could comment on Hillary’s defense in 1075 of a man accused of sexually assaulting a 12-year-old girl who Clinton  savaged in court.

More importantly, if Clinton is going to be excused for her calling women disgusting things because she supposedly did some good for them, why shouldn’t the same pass be given to Donald Trump? According to The Washington Post:

[M]any women who have worked closely with Trump say he was a corporate executive ahead of his time in providing career advancement for women. While some say he could be boorish, his companies nurtured and pro­moted women in an otherwise male-dominated industry. Several women said they appreciated how Trump granted them entry to a new playing field.