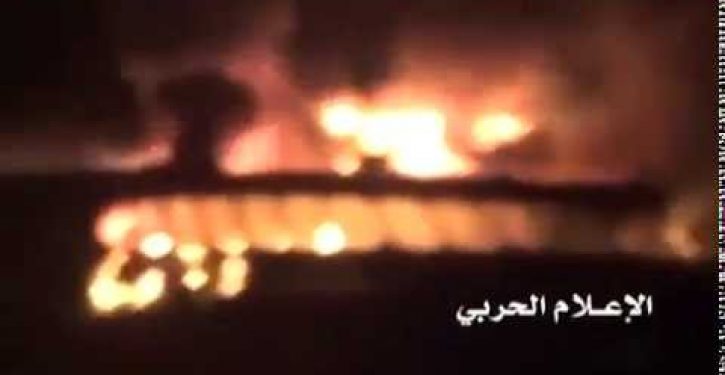 Although there are things we don’t know about this incident, it’s been confirmed by UAE that a ship was involved in an incident off Yemen, and confirmed by Saudi Arabia that personnel were rescued from a ship off Yemen at dawn on 1 October.

We also know the Emirates operates the ship seen in the attack video posted by Houthi rebels on 1 October (below).

So confidence is warranted in the report that the Houthis attacked the vessel with the rockets seen in the video, and left it badly damaged and in flames, in an area of the Red Sea just north of the Bab El-Mandeb Strait.

There’s a little more than meets the eye in this one.  Alert readers will observe that this is an odd-looking vessel.  That’s because it’s a high-speed catamaran, originally built for the U.S. Navy and commissioned as USS Swift (HSV-2).  Swift was used from 2003-2013 for special operations, training, and testing of various kinds, then decommissioned from the Navy.

As of 2015, UAE had the ship under lease to its National Marine Dredging Company.  But the ship showed up in Aden, Yemen, in July 2015, at a time when the Saudi-led coalition – which includes UAE – was ramping up the fight in Yemen against the Iran-backed Houthis.

No official information about HSV-2’s role for UAE in Yemen is publicly available.  But it’s reasonable to assume the vessel is being used for military purposes.  The most likely use would be for logistics support, and quite possibly command and control, from offshore.  HSV-2 is not heavily armed or armored for naval engagement.  But the vessel was originally fitted, like all the units of her class, for command/control electronics.

In either role, HSV-2 would make a satisfying, high-value target for the Houthis.  Her ability to shoot back at rocket attackers is limited – as opposed to that of a Saudi frigate, for example, which would be able to lay into the attack vector with lethal guns.

But that consideration won’t necessarily stop the Houthis for much longer.  From the video, it appears that the attackers were on a small boat themselves.  That makes this an attack at sea, and expands the area in which innocent commercial shipping is placed at risk.

I don’t think Iran or the Houthis particularly want to draw intervention from nations with bigger militaries, by dramatically increasing the risk to shipping in the Bab El-Mandeb Strait.  But Iran has already held a rocket-launching drill near the Strait of Hormuz in which her patrol boats showed utter – criminal – disregard for shipping safety.  So they’re not so all-fired worried about it that we should be complacent about their intentions.

Notably, it apparently took about 15 months from HSV-2’s public debut in Yemen to when the Houthis had the position, means, and confidence to attack her at sea.  The Houthis acquired the position in March 2015, when they gained access to Taiz Province and control of the military base at Dabab.  Iran has been delivering arms to the Houthis for years, occasionally interrupted by foreign intervention (see here as well).  But shoulder-fired rockets are a bit harder to sneak in than small arms.  It’s quite likely that Iran is staging arms shipments in Assab, the Eritrean port on the Red Sea that Iran has been using since December 2008, and having some high-value deliveries made by small boat across the strait.

The Houthis’ confidence for such an attack is also quite likely to have been built by training from Hezbollah fighters, who reportedly are in Yemen with the Houthis.  Hezbollah famously hit the Israeli patrol ship INS Hanit in 2006 using an Iranian-supplied antiship cruise missile, and has continued to pose a maritime threat on the coast of Lebanon and northern Israel in the years since.

These operational conditions are now established on the coast of Taiz Province.  Unless the Saudi coalition can forcibly eject the Houthis from coastal Taiz, the conditions won’t have to be reestablished.  Such attacks can be mounted again on a much shorter timeline.

This is the kind of festering, “low level” threat that just keeps growing, once the sheriff of the seas (that would be us) has tossed down his badge.  (It’s the kind of threat I’ve warned about numerous times since 2009.)  Fox reports that three U.S. Navy ships have been sent to the area of the attack.  But what good will that do?  We can’t baby-sit every square inch of the ocean.  The sheriff’s role on the seas depends on respect for the sheriff, and as every human brain understands, that comes not from the sheriff’s ubiquity, but from the certainty of consequences.

Those ships will leave, there will be no consequences from the attack, and the Houthis will just do it again when they find another juicy target.

The bottom line is this.  The Houthis are more concerned about fighting their war than they are about whether it spills over and affects international seaways.  Iran has little incentive to rein them in.  But – and this is important; pay attention – Iran does have incentive today to turn them loose.

We’ve reached the tipping point at which it buys Iran more to foment regional instability than it does to hold clients like the Houthis in check.  The “big dog” relative to this regional problem is no longer the United States.  It’s now Russia.  And Russia would be just fine with a gradual shift of perceived power over this chokepoint – the Bab El-Mandeb – to one of Moscow’s prize clients.

Russia knows how to strong-arm Iran if the mullahs get too frisky.  Having a threat that Russia holds a lever on, emerging on the other side of Saudi Arabia and the Suez Canal, is chessmaster’s gold.  As Rush Limbaugh likes to say, don’t doubt me on this.

None of this can now be “about” the agony of Yemen, which is undoubtedly real.  If you want the agony of Yemen, your only hope is the United States that used to be.  Russia, Iran, and Saudi Arabia don’t give a flip.  Europe is an inert quantity.  China is angling to come in at Russia’s advances in the Middle East from the flanks.

This is what the world is without American leadership.  Congratulations to us all.