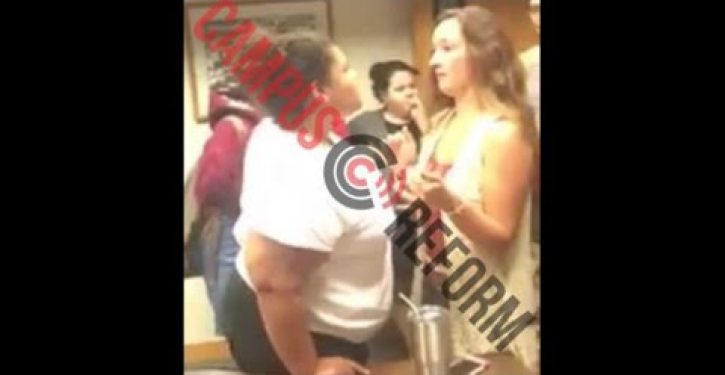 The Left always talks a good game of equality but they have yet to prove they believe their own holier-than-thou claptrap.

This is the case regardless of whether it has to do with equal pay for women working for the Democratic party (the audit of salaries in Nancy Pelosi’s office showed she pays her female staff 29% less than their male counterparts) or fighting against racism (as was evidenced in the many emails released from the DNC dealing with the “taco bowl voters”) or even religious rights (also evidenced by the DNC email leak planning to use the fact that Bernie Sanders might be an atheist against him in the South). These facts and many more show just how the Left deals with social justice.

In a fight for equality, social justice warriors at the University of Kansas started screaming obscenities at white students who didn’t feel the need for safe spaces. Imagine that! The self-proclaimed protectors of civility and equality respond to what was supposed to be an open conversation by shouting down, cursing at, and screaming in the faces of students with a different viewpoint!

But that’s conservatives’ faults. We let them get away with it. We continually back down because we don’t want to be seen as “combative” or “not caring” or “racist” or any other phrase or term the Left has hijacked and made their own tool.

The occasion for the one-sided grudge match was a university-sanctioned event whose goal was to debate the need for safe spaces and trigger warnings. The event was sponsored by the Young Americas Foundation and was called “Stand with Me.” It was organized in response to a video posted by transgender student Micha Cox. Cox had also written a poem about being harassed and berated on campus.

Part of the event was a 30-minute video with commentary about “trigger warnings” and “safe spaces.” At the 15-minute mark, Ben Shapiro (labeled a “conservative provocateur” by the liberals present) made the statement that “facts don’t care about your feelings.”

Can you say, “Microaggression?” The tenor of the dialog went downhill fast from there. Here is part of the conversation captured on video by Campus Reform (warning: profanity).

‘Fact checks’ of Trump are getting more absurd by the day
Next Post
Trans man (i.e., woman) gives birth. Media stunned, for some reason