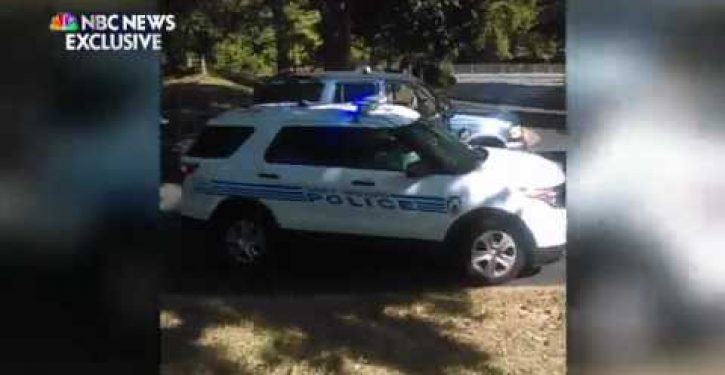 A video recorded by Keith Lamont Scott’s wife, obtained and released today by NBC News, carries a prefatory warning to the effect that the contents may be disturbing. To be sure, they are disturbing, though not entirely in the sense NBC News had in mind.

Yes, the video contains the final confrontation between Scott and Charlotte plainclothesmen and — yes — you hear the chilling report from the the gunfire that ultimately resulted in Scott’s death. But equally striking is what is absent from the video: the sounds and sights of horrified disbelief and shock you would expect from a woman who just witnessed her husband go down in a hail of bullets.

I can’t profess to know what was in Rakeyia Scott’s mind as she watched this horror unfold. We have only her words and actions to go by. And these paint a bizarre picture. The most emotion she evinces in the two-plus-minute video comes seconds after the gunshots. The camera is jostled as she runs toward her husband’s prone figure. “Did you shoot him?” she screams at police, “Did you shoot him? Did you shoot him?”

At this point, you might expect the woman to rush to her husband’s side. But she doesn’t. After twice shouting, “He better not be [EXPLETIVE DELETED] dead,” she arrives in view of her husband’s outstretched body. Then she stops, telling police:

I’m not coming near you. But I’m goin’ record you.

I’m not coming near you? Her husband lay bleeding on the ground, and her only thought is recording the incident?

A moment later she matter-of-factly phones 911 and dispassionately gives the location, then adds, “Police officers shot my husband, and he better live.”

This woman’s actions might make some sense if she had just seen a police car ram into her own vehicle. Instead, she has watched her husband of twenty years gunned down, and all she can say is, “He better [EXPLETIVE DELETED] live”? And we’re suppposed to believe the steady drumbeat that black lives matter?