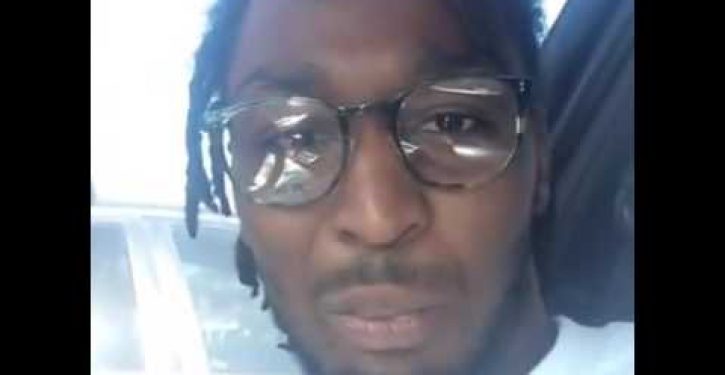 A man filmed his interaction with police over Facebook Live, only to accidentally reveal the cocaine he was hiding in his car.

Police pulled over Dominique Desha Green last week for not using his turning signal and for not wearing a seat belt, reports The Mirror. But that’s not how Green described the traffic stop, alleging instead that police pulled him over for “being black on a Friday.”

Officer Kristopher Trotter stopped Green because he did not use his turning signal when leaving the parking lot, according to the arrest warrant. Green tried to walk away from the scene, only to return to sit in his car, lock the doors, and roll the window down an inch to talk to Trotter.

“They’re just [expletive] with me because I’m young, black … and on the wrong side of the neighborhood,” Green said in the video, which follows (warning: profanity):

Trotter called for backup, as Green demanded to speak to his supervisor.

“I want to speak to your boss,” Green said in the video. “That’s like going to McDonald’s and somebody gets your order wrong and saying, ‘Let me speak to your manager.’ ”

Authorities say that Green revealed his attempts to hide cocaine over his Facebook live stream, while he tried to claim he was innocent of any wrongdoing.

“I’m glad I didn’t get out of the car. I got a pocket full of all kinds of s*it,” he said on camera, while recording himself hiding the cocaine in the side door.Green eventually exited the car, shouting “Black Lives Matter!” Police said even though they told Green his life was not in danger, Green resisted arrest.

As police booked Green into jail, he purportedly continued to threaten the officer who pulled him over. Green referred to Trotter as a “Pilgrim ass cracker,” according to police.

Green also warned that he would kill Trotter and his wife, as well as sexually assault Trotter’s daughter.

Riot police called to break up fight … between schoolchildren
Next Post
CNN puts words in Trump’s mouth: Adds ‘racial’ to his comment about need for profiling