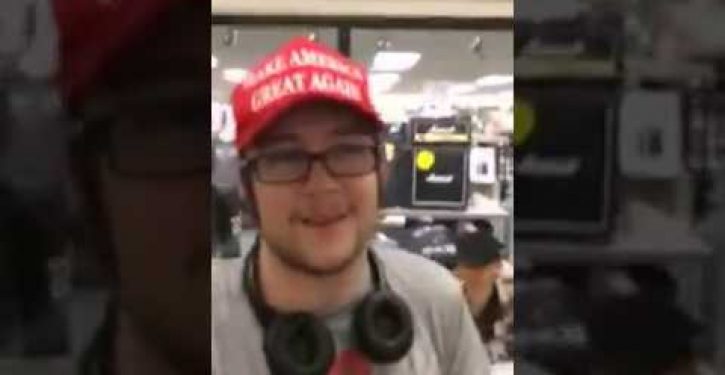 A viral video posted to YouTube on Thursday shows a college student at Canada’s Mount Royal University being berated by a social justice warrior who thinks the phrase “Make America Great Again” on a hat constitutes “hate speech.”

According to CBC News, the microaggressed coed is one Zoe Slusar, former vice-president of student life at MRU.

In the video, which follows, Slusar can be heard saying, “You’re not allowed to share hate language in a university,” to which the hat wearer, Matt Linder, calmly responds, “I’m not allowed to support a political candidate?”

He is allowed to wear the hat. As a student, I disagree with what the hat represents. I have diverse friends (culturally and sexually) who would drop a class if the person wearing the hat was sitting in the room with them, because they would feel unsafe. Given the deeper issues of intolerance and oppression represented by the hat, I disagree with it.

Unsafe? Over a hat?

A post at Truth Revolt provides a bit more information about the exchange:

Linder’s friend, who is filming this, jumps in and asks, “What is hate language about this?”

“You just said he doesn’t like immigrants,” the friend argues. “His wife’s an immigrant. It’s illegal immigrants he doesn’t want.”

Slusar is undeterred and demands that she come with him to discuss it with the university President David Docherty.

Other students begin to gather and one is so outraged by the hat that he steals it from Linder, thereby saving the other snowflakes from the piece of dangerous headgear — or to be more precise, the words displayed on it.

What this incident shows is the totalitarianism inherent in liberalism.  It used to be that liberals would say they disagree with a point of view but would defend the right to express it. Those days are long gone. Modern liberals have more in common with those who once ran certain dictatorial regimes in 20th-century Europe than they do with classic liberals.

The CBC says that university officials are aware of the video but declined to comment on the incident.

“Mount Royal University respects individuals who exercise their constitutionally-protected right to freedom of expression,” the school said in a statement.