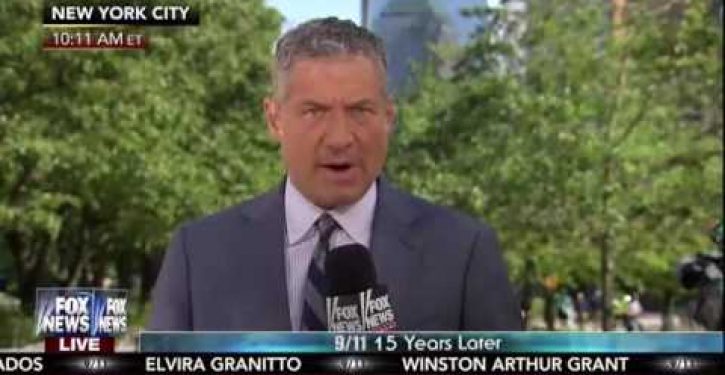 Democratic presidential nominee Hillary Clinton is said to have had a “medical episode” early today that forced her to leave a 9/11 commemoration ceremony early on Sunday. This from a law enforcement source who witnessed the episode and spoke with Fox News.

[Clinton] appeared to faint on her way into her van and had to be helped by her security, the source said. She was “clearly having some type of medical episode.”

Nick Merrill, a Clinton spokesperson, released a statement confirming that  attended the ceremony but “felt overheated” and “so departed to go to her daughter’s apartment, and is feeling much better.”

The claim that she “felt overheated” might have made some sense yesterday when temperatures in New York City hit 90 degrees. Currently, the temperature is a comfortable 76 degrees. At 9:30 a.m., the hour when Clinton is said to have left the ceremony, according to the Daily Mail, temperatures were in the mid- to low-60s.

Comments by others at the scene cast further doubts on Merrill’s account:

[A] witness told Fox News that Clinton stumbled off the curb, her “knees buckled” and she lost a shoe as she was helped into a van during her “unexpected early departure.”

After Clinton left the ceremony, the reporters following her on the campaign trail were prevented from leaving the media area for a period of time.

It is entirely possible that Hillary Clinton is a healthy 68-year-old woman, as her staff has maintained repeatedly. But today’s episode, combined with other recently reported incidents, suggest that there may be a problem that the candidate won’t even admit to herself.

Here, courtesy of Twitter users Zdenek Gazda, is a video of Clinton being helped into her van. She appears very wobbly and comes close to falling over as she climbs into the vehicle.

Taste of 9/11: Terror on airplane as deported illegal screams ‘Allahu Akbar,’ ‘death is coming’
Next Post
Cartoon of the Day: ‘Deplorable me’