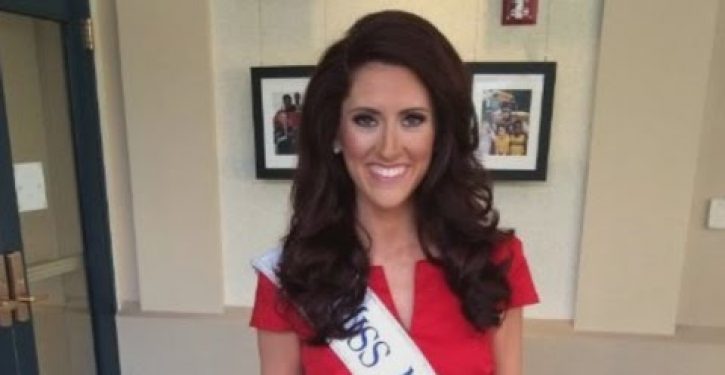 If you are a fan of beauty pageants and especially of the Miss America pageant, which is the grandaddy (grandmammy?) of them all, you’ll find that one of this year’s contestants possesses a trait that sets her apart from any other woman in the event’s 95-year history. It’s not that the contestant, Erin O’Flaherty, looks awful in a swimsuit or is cross-eyed or bowlegged or lisps.

In fact, what makes O’Flaherty, a native of St. Louis, different is not outwardly noticeable. She is openly — if not visibly — gay.

O’Flaherty, who was crowned Miss Missouri last month, sat down for an interview with Entertainment Tonight, during which she described herself as “happy to make history.”

The narrator of the video that follows heralds O’Flaherty’s win as a big victory for the LGBT community, but I can’t imagine that all liberals are equally enthusiastic about the news. Beauty contests, after all, are “the ultimate display of women as interchangeable, vying for the right to be the shiniest object in the room.”

The contests are an antiquated reminder of exactly what we don’t want for women, and they should have no place in our future.

That was Jessica Valenti, writing at The Guardian, but other feminists have shared similarly hostile views of this exercise in the objectification of women.

I myself have no intention of watching the Miss America contest, which I find mindless for reasons independent of the criticism by Valenti et. al. I do wonder, however, whether this year’s Q & A session will ask contestants how they would go about squaring the above circle.

Cartoon of the Day: Rare sightings
Next Post
Obamacare shrank the economy through Medicaid changes and income cliffs