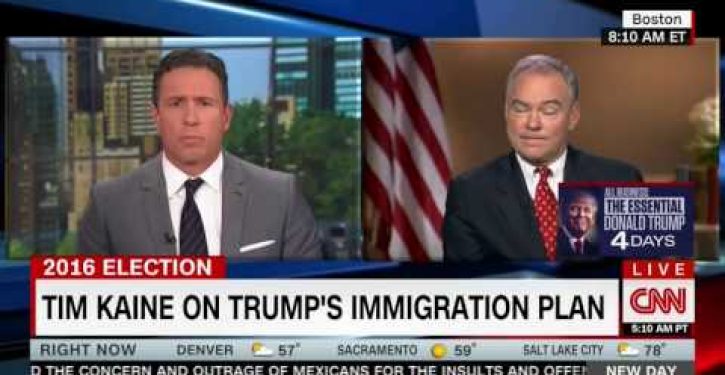 It’s been about a year since a Quinnipiac University poll of registered voters found that the “first word” that comes to voters’ mind when they hear the Democratic presidential frontrunner’s name is liar, with dishonest coming up fast on the inside rail. In the time that has elapsed since, Hillary Clinton has done little to dispel the widespread belief that she cannot be trusted.

If anything, she has solidified the conviction among the electorate that she lies more often that not by adding new whoppers to her already voluminous store.

What Clinton needs if she is to alter her trustworthiness numbers is a reliable “second” who can run interference for her on the campaign trail. Somebody unlike Tim Kaine.

When the question arose yesterday — on  “CBS This Morning,” no less — of when Clinton will finally hold a press conference, Kaine offered this defense:

If the former Virginia governor can’t see any difference between casual brushes with the media and a hardcore Q & A, he is either hopelessly naïve or an equally bad liar. Whichever is the answer, he is not helping Hillary.

Nor was he helping when he appeared an hour or so later on CNN, where he called sanctuary cities “phantoms.” Here is a video clip in which he makes this assertion and is promptly challenged by host Chris Cuomo.

Kaine is having these problems, mind you, while sitting for interviews with the mainstream media, which are on his side. If this is the best he can do, maybe Team Hillary should consider a more capable replacement … like Joe Biden.

Liberal activists organize petition to ban fracking in Florida … just one problem
Next Post
HLN blurs out t-shirt of good Samaritan who rescued infant from hot car, but what did it say?