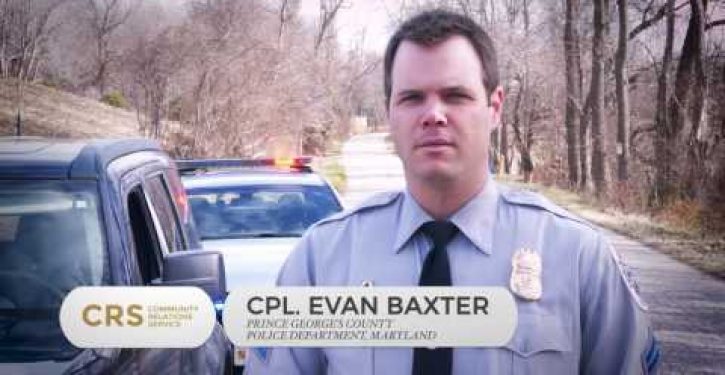 Here’s a story with a little bit of everything. There’s transgenderism, police (a pox on them), and a new taxpayer-funded instructional video from the Obama administration.

The Justice Department (late of “justice-involved youth” fame) has released a training video that teaches police the right —and wrong — way to deal with transgenders.

The video, which appears below, is titled “Law Enforcement and the Transgender Community.” It opens with a familiar scenario. A police car with flashing lights signals a motorist on a deserted country road to pull over. A voiceover intones, “Your safety as an officer is always the first priority.”

Then the narration takes a bizarre turn:

However, in order to be safe and effective, officers must be able to distinguish between a threat and a —

You might expect that the next words will be “false alarm,” or some other phrase conveying the same meaning. But you’d be wrong. The word that completes the sentence is stereotype.

Apart from the abrupt shift in thought, you’re probably asking yourself what stereotyping has to do with law enforcement. You learn in the next block of narration that the answer is “nothing”:

Under emergency circumstances events always determine an officer’s response. This presentation deals only with non-emergency and non-crisis situations.

So … it’s not a training video after all. It’s really an etiquette lesson, carried out with the same grave sense of purposeful indignation as those college directives to professors who had better memorize which pronouns go with which of the 60 known genders or else.

As the video continues, the cop gets out of his car and walks over to the driver’s window of an SUV driven by what looks for all the world like a guy in drag. The cop dutifully asks whether the driver prefers to be addressed as ma’am or sir. Frankly, I’d dock him a month’s pay for assuming the choice is binary.

But the DOJ apparently doesn’t roll that way and is OK with the way the situation is handled. The officer, in a polite though businesslike way, checks out the registration, gives the driver a warning to fix a broken tail light (the reason for the stop), and sends zy on xyr way.

It’s what comes next that puts the opening scenario in a broader context. A second cop, identified onscreen as Sgt. Brett Parson, says to putative members of the force who have been ordered to watch the 12-minute video:

I don’t have to be in the room to know what just happened. Someone snickered, laughed or made, a joke.  Trust me, I know, I’m a cop too. As police officers, we use humor to deal with things that make us feel uncomfortable or afraid…. But to outsiders it’s perceived as unprofessional and disrespectful.

I’m not a cop, but I have reason to doubt that officers in every department throughout the nation or going to act the way Parson assumes they will. Moreover, I am skeptical of the entire reason behind making the video. Why not just instruct cops to avoid using any form of address when dealing with stopped motorists and others with whom they have business? Problem (to the extent this is a problem) solved.

At a time when men in blue are luckier than ever to return home at their end of their shift, I for one am delighted that the federal government is spending our money on this pressing issue.

It’s not just conservatives who think Hillary Clinton is too sick to be president
Next Post
Cartoon of the Day: For a whiter (white)wash