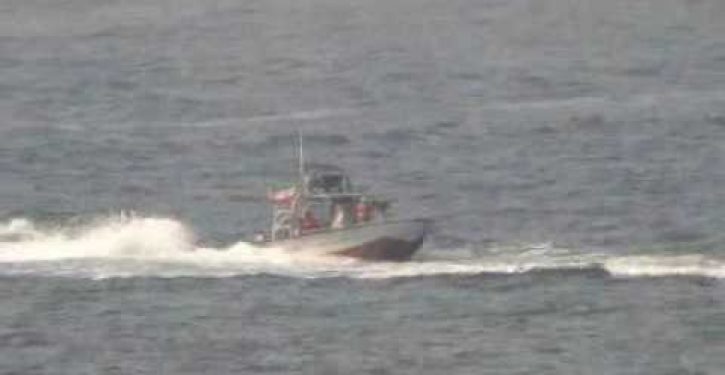 Once again, Iranian patrol boats have operated close to a U.S. warship in an unsafe manner.

This time, four armed boats of the IRGCN (the Revolutionary Guard Navy) approached USS Nitze (DDG-94), an Arleigh Burke-class Aegis destroyer, in international waters in the Persian Gulf, between the coast of the UAE and the Iranian island of Abu Musa.

The Navy posted a short video online from the incident, which occurred on 23 August.  The video is below.  The incident was described to Reuters by an unnamed U.S. defense official:

The official, speaking on the condition of anonymity, said on Wednesday that two of the Iranian vessels came within 300 yards of the USS Nitze in an incident that was “unsafe and unprofessional.”

The vessels harassed the destroyer by “conducting a high speed intercept and closing within a short distance of Nitze, despite repeated warnings,” the official said. …

“The Iranian high rate of closure… created a dangerous, harassing situation that could have led to further escalation, including additional defensive measures by Nitze,” the official said.

USS Nitze had to change course in order to distance itself from the Iranian vessels, the official said, adding that the incident could have led to a diplomatic protest, but the United States does not have diplomatic relations with Iran.

The boats approached with their mounted guns uncovered.

The video includes audio of a voice report being made on the incident, which includes the geographic coordinates that were used to produce the map.  (See further below for a zoomed-out overview map.)

Some reports indicate that USS Mason (DDG-87), another Aegis destroyer, was in company with Nitze.

The approach by the Iranian boats was certainly close.  Given the apparent focus level of the “big eyes” trained on the boats, in the context of the whole video, it looks like the closest-approaching boats came closer than 300 yards.

Although it’s getting hard to remember, there was a time when such obvious games of “chicken” were rare.  The non-response from the Iranian boats, their refusal to turn away when warned with flares and the ship’s whistle, and the outcome – the U.S. warship giving way – are all bad portents.

The U.S. destroyer was in international waters, more than 12 nautical miles off the coast of Abu Musa.  There were reportedly no communications from the IRGCN boats, meaning that Iran didn’t assert any sovereign prerogative she might have the right to exercise in her maritime contiguous zone (which extends from 12NM to the baseline between Abu Musa and the coast of the UAE).  The boats were just zooming Nitze in an irresponsible, unsafe manner.

For comparison, we can take a quick look at the last two high-profile encounters with Iranian patrol boats (although we can assume there have been a number of others in this period.  There were some 300 in 2015).

The most egregious of the recent incidents was on 26 December 2015, when Iranian boats launched rockets in an astoundingly unsafe manner, within a few hundred yards of U.S. and coalition warships transiting in the Strait of Hormuz traffic scheme, including the carrier USS Harry S Truman (CVN-75).  We reported on that at the time.

I later did a map reconstruction of the event and its probable location, along the inbound “Western traffic scheme,” for someone else, which I include below.  (We were never told exactly where the incident occurred, but the carrier was inbound at the time, and the Western traffic scheme is the one where Iran could launch rockets parallel to the inbound traffic scheme and not risk the rockets falling in Omani waters.  The map depicting the traffic schemes makes this clear.  The assumption is that the Iranians want to avoid unnecessary friction with Oman, which I think is sound.  Making Oman nervous serves no purpose.)

It’s a rough graphic, not cleaned up for publication, but should be understandable.  The original video of the incident follows the maps.

The other incident of note was in July, when General Leonard Votel (USA), the commander of CENTCOM, was visiting aboard USS New Orleans (LPD-18), a San Antonio class amphibious transport dock ship with Marines of the 13th Marine Expeditionary Unit embarked, and part of the USS Boxer amphibious ready group (ARG).

According to information about New Orleans’ schedule, the ship transited out of the Persian Gulf with General Votel aboard on 11 July, and then transited back in the next day, headed for a four-day port visit in Jebel Ali, UAE.  General Votel specifically wanted to be on the ship for a Strait of Hormuz transit, and New Orleans’ tasking appears to have accommodated that.  (The ship left the Gulf again on 18 July, headed for Sri Lanka and then the voyage home to San Diego with the Boxer ARG/13 MEU.)

According to the news reports – there were reporters embarked with General Votel – it was during the “southbound” transit of the SOH that an Iranian missile patrol boat (a Chinese-built Houdong class, which Iran now calls the Thondar class) and four smaller patrol craft made their close approaches to New Orleans.

The closest approach reported in that encounter was 500 yards.  Afterward, General Votel’s staff was more sanguine about it than some Navy officials were when speaking anonymously.

My assessment is that the Iranians were aware General Votel was on the ship, and were probably determined to intercept it not so much because he was there as because the whole event had a very unusual profile.  An amphibious transport dock ship going back and forth through the SOH in less than 48 hours, carrying one of the U.S. military’s most senior commanders, is not a routine evolution.

The news reports, again, are unanimous that the intercepts by Iranian boats took place during the “southbound” transit.  The Iranians wouldn’t conduct the intercepts in Omani waters (see the traffic scheme map), so it appears that the boats showed up just at the point where the outbound transit breaks into international waters, as the strait widens.  That would comport with statements at the time that the Iranian boats intercepted New Orleans in “international waters.”  (By contrast, if the intercept occurred in the outbound side of the Western traffic scheme, it would have been when the New Orleans was actually heading east, and would have been in Iranian waters, not international waters.)

The July encounter isn’t as worrisome as the other two, although it’s informative about the level of jitters being experienced by the Iranians.

It’s essential to keep the big picture in focus on this.  It’s good that the incident on Tuesday didn’t escalate.  But it’s not good that to prevent escalation, the U.S. warship had to give way, in a situation where it had the right, under maritime law, to stay on course and take stronger measures to deter the Iranian boats.  Iran is being allowed to get away with too much.  As with everything else we’re not deterring today, this situation will get worse, not better.