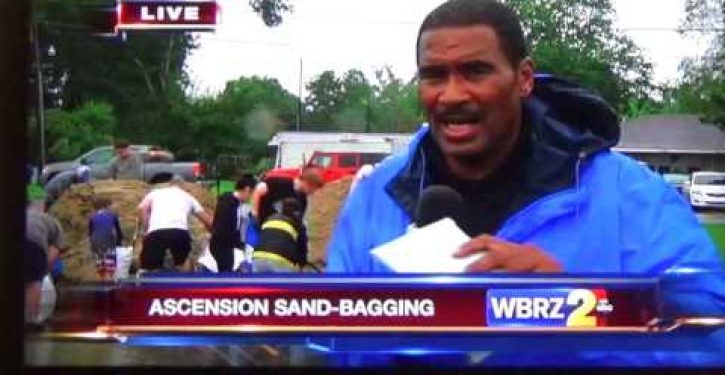 President Obama has come in for some criticism over his response (or, more precisely, the lack thereof) to the historic flooding of Louisiana over the past week.

Indeed, we’ve been criticizing him here at LU.

But now that can all end.  Obama has reached out from his golf vacation on Martha’s Vineyard to mount a response, and thank goodness someone thought of it.  In a 16-page guidance memorandum, Obama and five of his federal agencies have issued warnings and instructions to Louisiana about avoiding “discrimination” in the state’s handling of the emergency.

The Obama administration quite transparently assumes, going in, that there will be “discrimination.”  The flood of 2016 is actually a very useful pretext for rehashing allegations about discrimination after Katrina, which is always a political bell-ringer.

The memo devotes about three of its 16 pages to the rehash, including baseless allegations that black Cajuns weren’t provided with rescue services or support because of discrimination against them; reports that illegals who lost their living arrangements in Katrina were found to be, well, here illegally, and processed accordingly; and accusations, later the subject of a major lawsuit, that blacks were discriminated against in the rebuilding effort.

Cajuns in the flood zone are coming off days of houses and cars underwater, homeless nights with no place to lay their heads, many lives saved only by the most daring rescues.  Now they’re trying to deal with looting, challenges in distributing water and food, piles of destroyed belongings heaped in streets and yards.

But Team Obama knows what they really need.  The memo finally gets to the heart of the matter.  The flood victims need legal representation, non-discriminatory access to planning meetings, and notices posted in their languages explaining their right to non-discrimination, and where they can lodge complaints if they feel discriminated against.

Of course, no humanitarian response can succeed without the collection of data that will, if collected properly, reveal where discrimination occurred.  See page 13 for the passage on this point.  The tone in which the warning is issued to Louisiana is conveyed nicely in these sentences on page 14:

Recipients [of federal emergency aid] are also reminded that Title VI regulations authorize the routine collection of data and other information necessary to ensure nondiscrimination in federally-assisted programs and activities, and that they are required to provide data and other information that demonstrates their compliance.  State and local government recipients should be particularly vigilant in collecting and analyzing data.

The Obama memo isn’t for the flood victims’ benefit at all.  It’s for the federal government agencies and an army of lawyers.  The “Promising Practices” section lays out what Louisiana and its overwhelmed parishes need to do, to avoid being immediately attacked with DOJ “investigations” and lawsuits brought by “legal aid” organizations.

In a state whose government office buildings have themselves been underwater in the last week, and whose government employees, like everyone else, have lost everything they had, I’m sure they’ll get right on that.

Under Obama and the progressive left, government is a mechanized vulture feeding on the people’s misfortunes.  In that context, a post from Rod Dreher cited by The Washington Times (link above) seems to come from a different universe:

Needless to say, some Louisiana residents were offended, including the American Conservative’s Rod Dreher, who took umbrage at receiving an anti-discrimination lecture from Washington, D.C., as locals struggle to rescue, house and feed their neighbors.

“[E]verywhere you look you can find black folks and white folks loving on each other, helping each other through this crisis,” Mr. Dreher said in a Thursday post.

And from what I can tell, you can.  I’ve been watching black folks rescue white folks, and vice versa, for a week now, courtesy of social media.  Tireless emergency workers, the Coast Guard, the National Guard, doing what they do, God bless them.  Who doesn’t know by now about the “Cajun Navy” roaming the flooded streets in private boats, getting people and pets off rooftops and out of stranded vehicles?  Churches, volunteer groups, the Salvation Army, corny old Wal-Mart — they’re all there, just as they were after Katrina, just as they always are, with outstretched hands, and trucks arriving loaded with offerings from the rest of America to fill them.

The rescues, heroism, and support are the legacy of America — Americans of every race and background.

5 things to know about World Vision (beyond the millions it funneled to Hamas)
Next Post
Korean War vet, 85, doused with gasoline, burned to death in gruesome slaying