Syrian President Bashar Al Assad is the strongest he’s been since the war began, despite Barack Obama’s statement in 2011 that “the time has come for President Assad to step aside.”

Radical Islamic fighters are the only strong opposition forces left, even though the U.S. has spent hundreds of millions of dollars supporting moderate groups. The Islamic State holds vast swaths of territory, after the U.S. spent $11 billion and two years fighting the terrorist group.

Iran and Assad played a major role in shaping the Syria of 2016, but the most decisive actor in the conflict has been Russian President Vladimir Putin.

In 2015, the picture of Syria was quite different from today. The Assad regime appeared to be on its last legs, controlling less territory than at any time since the war began. The U.S. was the predominant Western power inside Syria, with a new $500 million train-and-equip program. Obama envisioned thousands of U.S.-backed fighters trained in Turkey and Jordan fighting ISIS with U.S. supplied weapons.

In 2015, Putin faced the most combative geopolitical climate since he assumed office in 1999.

“Russia’s intervention in Ukraine and annexation of Crimea had adverse effects,” Franklin Holcomb, a Research Assistant at the Institute for the Study of War explained to The Daily Caller News Foundation. Holcomb elaborated, “Russia’s standing in the international community collapsed.”

Putin’s decision to directly militarily intervene in Syria, coupled with an inept Pentagon, reversed the roles significantly as 2015 unfolded.

The U.S. discontinued the train-and-equip program in October 2015, after the Pentagon spent millions of taxpayer dollars and trained only a handful of fighters. Worse, several U.S. fighters defected to al Qaeda’s Syrian affiliate and turned over their weapons. Obama administration officials admitted to The New York Times in 2015 that their strategy simply wouldn’t work because most Syrian rebels were focused on fighting the Assad regime and didn’t much care about ISIS.

Putin, seeing his client state of Syria on the verge of collapse, decided Syria offered him multiple opportunities for redemption. Michael Kofman, a Global Fellow at The Woodrow Wilson Institute explained to TheDCNF, the dire battlefield position of the Assad regime at the time “forced Russia to intervene more directly.”

Putin decided to bill his Syrian intervention as a “counter-terrorism” mission, saying Russian targets would only strike terrorists who were trying to destabilize the Assad regime. Throughout Russia’s intervention in Syria, the country has labeled any group opposing the regime, regardless of ideology, “terrorists.”

Putin’s labeling of his mission as “counter-terrorism,” was part of a larger scheme to re-legitimize himself on the world stage. Maria Snegovaya, a Russian foreign policy expert explained to TheDCNF, that Putin had five concrete goals in the Syrian intervention:

Amidst Russia’s vigorous intervention in Syria, Obama sought to clarify his own goals and what program he would pursue going forward. Kofman maintains that in the wake of Russia’s intervention, Obama “basically bowed out.” He elaborated that the U.S. has “accepted” that Assad is likely to stay in power. Obama’s efforts have largely been focused on assisting local forces that are only focused on fighting ISIS, and not on the broader struggle for control of Syria’s future.

Russia, in partnership with Iran and Assad, provided overwhelming air support to the Syrian military against any force holding territory it desired. A SkyNews investigation revealed in August that Russia is hiring hundreds of private military contractors to fight on the ground in Syria, catching the government in a lie that it only assists Syria from the air. The military size and scope of Russia’s commitment to Assad is simply orders of magnitude larger than what the U.S. is willing to commit.

Kofman and Snegovaya cautioned that Russia may be fighting in Syria for many more years to come. Snegovaya highlighted that “Russia cannot completely pull away from Syria, but cannot start a full-blown operation either.” She elaborated, saying, “The Kremlin simply has no resources and lacks serious domestic support for a full-fledged military operation at the moment.”

Despite these limitations, Kofman believes that the U.S. has all but conceded “who will be, and who will form a transitional government after the civil war. It now looks like Russia has the opportunity to clarify this conflict and remove most of the opposition.”

Reports now indicate the U.S. is on the verge of reaching a military cooperation deal with Russia inside Syria. Under the deal, the U.S. will pursue joint counter-terrorism operations against jihadist groups inside Syria.

The deal has been met with widespread objection from nearly all partners in the U.S, including anti-ISIS coalition within the U.S. government, and from non-jihadist Syrian opposition groups fighting on the battlefield. Opponents of the deal also highlight that by partnering with Putin in Syria the U.S. is playing a major role in delegitimizing Russia on the world stage.

Kofman, who favors a deal with Russia, closed his conversation with TheDCNF saying “we lost the proxy war, we weren’t ever that committed to it.”

Cartoon of the Day: Cover story
Next Post
Why Hillary Clinton’s latest lie is more troubling than her whoppers 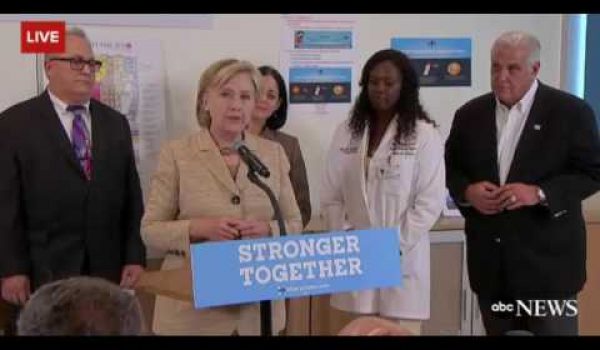