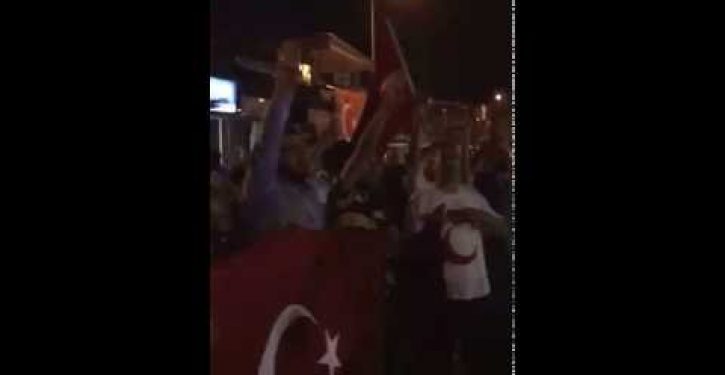 This is a follow-up to the breaking-news headline we put up earlier tonight (it’s after midnight on the U.S. East coast, now early on Sunday 31 Jul).

Backtracking a little, we reported Friday on protests outside the Incirlik air base at Adana, which were mounted by Turks shouting “death to America!”  Erdogan, you will remember, had the (Turkish) commander of the air base arrested as a coup plotter after the “failed coup” of 15 July, and had the base raided and cut off from power and humanitarian services for nearly a week.  In the days since, Erdogan has blamed the U.S. for the fomenting the coup.

As discussed at the last link, of course, the U.S. has maintained about 50 tactical nuclear weapons at Incirlik for some time.

Following the extended protests on Friday, the news broke on Saturday night that the base was being “surrounded” by Turkish police forces and all the entry and exit points locked down.  According to a Hurriyet (Turkish news outlet) report, which appears to have been the first one to break this story, Turkish authorities were acting on suspicion that a “second coup” was being mounted from the military base at Adana.

Reportedly, the Adana police were notified that they needed to lock down the base at about 11:00 PM (2300) local time the night of 30 July.  A government minister stated that the measures were being taken because of a “general safety inspection.”  However, the timing of the deployment makes no sense for that explanation.

The Turkish reporting, repeated and modified in other Turkish media, said that “7,000” troops or police were activated to surround the base.  I noted earlier that this sounded wildly excessive.  And in the last several hours, there has been no evidence of that many policemen or troops being positioned around the base.

Below you’ll find a few videos from local sources, which were posted the night of 30 July and appear to show areas outside the base after the police deployment began.  I note two things about them:

1. The locals clearly do think this is unusual.  It’s not something they appear to recognize as a “routine safety inspection.”  (Believe me, they’d know a routine event if they saw one.  The local civilians are always very savvy about what’s normal or not at a military base.)

2. The people in the videos don’t seem to think they’re in danger.  Nor are there visible anything like the “7,000 police” or military police referred to in the initial report.

(Sorry, I don’t have translations for the videos.  A friend is trying to contact a Turkish speaker to see if there’s any insight to be gained from the words spoken.)

That said, other images apparently sourced from photographers on the scene show a big convoy of utility trucks being moved to the base on Saturday night.

These heavy dump trucks are being made ready to enter #Incirlik Air Base (are they trying to close it?) pic.twitter.com/UQlGAv5FsC

As you can see in a couple of the videos, there was at least one smallish protest outside the base in the nighttime hours.

General Joseph Dunford, Chairman of the Joint Chiefs of Staff, is scheduled to visit the U.S. contingent at the air base on Sunday 31 July.  Even in the unusual circumstances of the post-coup environment, it would not be expected or legitimately “routine” for the Turks to rush the base in the middle of the night with a big convoy of utility trucks, and lock down all the entry/exit points, as a “security” measure for the VIP visit.  Dunford’s visit is not an innocent explanation of what’s going on.

If you’ve been following this on Twitter (about the only way you can follow it, now that Erdogan has cracked down on the foreign and independent media), you may have seen tweets about the air space around Adana being closed.  The initial Turkish reporting indicated that the air space around the base would be closed.  But I’ve seen several commercial aircraft land and take off at the civilian airport at Adana in the last three hours (i.e., on FlightRadar24) — so clearly the air space, per se, isn’t closed to all traffic.  The military air base may be closed.

And that may or may not have any effect on General Dunford’s arrival.  Frankly, if I were the commander-in-chief, I wouldn’t send my Chairman to a base that was being locked down by the host nation.  So it’s possible to read into this situation a disruptive move of some kind by Erdogan.  We know he’s encouraging the theme that the U.S. was behind the 15 July coup, and has been upping the ante with increasingly confrontational rhetoric.

Notably, a couple of independent media folks had a brief exchange on Twitter about trying to contact the U.S. command element at the air base.  One said the base couldn’t be reached by any method — seemed to be incommunicado (which would be very unusual) — but the other said she was able to get through on the phone to someone.  The individual reportedly said “We are safe, that’s all I can say.”

Have not been able to reach Incirlik through PA number, comm post, or any other. Strange.

The media silence on this has seemed remarkable to many, but I think that’s a conditioned reaction rather than an analytical conclusion.  The event certainly merits full coverage.  But how exactly would the mainstream media cover it?  They’re not on the ground in Incirlik.  There are no independent, freely-moving Turkish media there to feed reliable information.  The amount of information coming over Twitter is down dramatically from what we saw the night of the “failed coup” — which I also followed on Twitter. The number of tweets is much lower, and most of them simply recycle the same few reports.

The fact that it feels like the lights are going out on Turkey is perhaps the most ominous aspect of this whole thing.  It’s hard to form a judgment of what’s really happening at the air base, because we don’t know enough.  And we can’t confidently predict that at some point, we will know enough to form a better judgment. Yet there our airmen are, locked down whenever Erdogan wants, in the middle of Turkey.

A couple of final points for tonight.  One, Turks who are tweeting and blogging about this are making a connection between the lockdown of Incirlik and a report from earlier on 30 July that police in Tatvan, on Lake Van in eastern Turkey, had been sent to look for officers at a local military base who were thought to have been involved in the 15 July coup.  There is also a speculative link to the closure of the Turkish air base at Akinci, northwest of Ankara (the capital), on Friday.  That closure was also connected to the 15 July coup.  Obviously, there is no way to independently evaluate these associations.

BREAKNG: Akinci Air Base in Ankara, center for coup-plotters, will be closed: Turkish PM – @anadoluagency

The other point is that there’s more going on than just events inside Turkey.  The biggest thing affecting Erdogan’s feelings about the U.S. in the last week isn’t about Fetulleh Gulen or the ridiculous allegation that retired General John Campbell engineered the 15 July coup.  The biggest thing is the Russian-Iranian plan to finally retake Aleppo — a huge move in the Syria campaign, which has been made possible by Obama’s agreement to abandon any independent strategy and act as Putin’s butt-boy in Syria.

Of course, the long, Kurd-infested border between Turkey and Syria is of great general concern to Erdogan.  But in strategic terms, no other geography has the concentrated importance of Aleppo for Turkey’s interests in the outcome in Syria.  An Aleppo divided, and not available to Assad, Russia, and Iran as a wholly-owned redoubt staring down on Turkey from just across the border, has kept things precisely as Erdogan would like them for more than four years now.  But that’s going to end.  Erdogan has been busy making nice with Russia since the coup, and this is what he gets for his trouble.

Obama’s engineered collapse of American power has left Turkey in a bad spot with little leverage.  There’s a limit to what Erdogan can do, but it’s actively stupid to insist, complacently, that he won’t do the things he can do at this point.  He’s angry and frustrated at his strategic situation — specifically goaded by the recent changes in it — and already behaving inside Turkey like a brutal dictator with no moral compunction.  He won’t suddenly start observing the niceties of the Pax Americana era when there’s no America to hold the Pax stick over him.

It would have taken the remnant of Kemalist Turks in the military, judiciary, academia, and media to restore that kind of Turkey of their own volition.  And they’re being systematically purged as I type.  Whether this thing spirals out of control quickly or slowly, it can only go one direction.

*UPDATE*: 31 July-1 August – As reader “ibrahim daoud” indicated, there was a report from a Turkish news outlet (referenced here) that local police allowed the air base to open again after about four hours.  It’s hard to judge if that “four hours” report is correct, since various forms of media attention on this event continued long past the four-hour mark from the initial reporting, without anyone providing information about the base reopening.

That’s the difficulty and danger of this situation: Erdogan has clamped down on the media, and there’s no independent accountability for what’s happening.  It’s probable, since we haven’t heard about this situation escalating, that the report of the base reopening is correct, even if the timing can’t be verified.

There’s also information that General Dunford has, in fact, arrived at Incirlik.

Speculation in the blogosphere that Erdogan is preparing an Iran/1979-style attack on American interests in Turkey is not ill-founded at this point.  It is more than we have specific evidence for.

Less convincing are suggestions that Erdogan wants to up the ante on his demand for the extradition of Fetulleh Gulen.  If Erdogan plays a card like effectively holding NATO allies hostage, he’ll be blowing big holes in his relations with every moderate, status quo nation on the planet.  Other goals may be worth that to him, but merely getting Gulen back isn’t.

I suspect he’s hoping to alarm Obama into a more accommodating mood — and perhaps other NATO governments as well — with demonstrations, but that he won’t actually change the game, with explosive moves, for small objectives.  Only for the biggest ones.  Until his purge-takeover is secure, he won’t be ready to move on to those.