Obama’s allies are helping fuel the black rage behind recent murders of policemen in Dallas and Baton Rouge. As the Daily Caller reported, Zack Ford, an editor at the progressive website ThinkProgress, responded to the Baton Rouge cop massacre Sunday by saying black people were “taking justice into their own hands.” Three Baton Rouge cops were murdered by Gavin Long, a member of the anti-white Nation of Islam who viewed police as racist killers. Ford declared that “Given how police haven’t been held accountable for murdering black people, it’s no surprise some are taking justice into their own hands.” Never mind that one of the three officers slain, Montrell Jackson, was black. ThinkProgress is the voice of the Center for American Progress, which is a close ally of the Obama administration, and has been aptly described as “Obama’s Idea Factory” by Time magazine. Ford was doubtless saying what many in the White House think but would never be so foolish as to say openly.

Obama himself continues to fuel this rage, by making baseless claims of systematic racism by America’s police against blacks, as he did both before and after the recent murder of five cops in Dallas. As Minnesota lawyer John Hinderaker notes, “From his earliest days as president, when he derided Cambridge police as ‘stupid,’ Obama has endorsed and propagated the great lie that American law enforcement is systematically racist. That strategy has worked very well for Obama and for the Democratic Party,” by mobilizing angry black voters.

As I explained at length earlier, it is simply false to claim that police are systematically racist toward blacks in arrests and convictions, since blacks’ higher arrest and conviction rates are the result of a higher black crime rate, not racism by police or prosecutors. Economist John Lott made the same point in the New York Post, in “Obama’s false racism claims are putting cops’ lives in danger.”

Yet, Obama made just such false claims against the police on July 7, right before the Dallas shootings, which were committed by a man who wanted to “kill white cops.” Incredibly, he did so after the shootings as well: Obama repeated this false meme at the Dallas memorial service for the slain officers, notes Heather Mac Donald of the Manhattan Institute. As the Washington Post reported, in the aftermath of Dallas, Obama once again resorted to “pointing to racial disparities in searches” and “arrests” of blacks compared to whites “as proof of police bias.”

In a speech from Poland just hours before five officers were assassinated in Dallas on July 7, Obama misled the nation about policing and race, charging officers nationwide with preying on blacks because of the color of their skin. Obama rolled out a litany of junk statistics to prove that the criminal justice system is racist. Blacks were arrested at twice the rate of whites, he complained, and get sentences almost 10 percent longer than whites for the same crime. Missing from Obama’s address was any mention of the massive racial differences in criminal offending and criminal records that fully account for arrest rates and sentence lengths. (Blacks, for example, commit homicide at eight times the rate of whites and Hispanics combined, and at about 11 to 12 times the rate of whites alone.) Instead, Obama chalked up the disparities to “biases, some conscious and unconscious that have to be rooted out … across our criminal justice system.”

Then five Dallas officers were gunned down out of race hatred and cop hatred. Did Obama shelve his incendiary rhetoric and express his unqualified support for law enforcement? No, he doubled down, insulting law enforcement yet again even as it was grieving for its fallen comrades. In a memorial service for the Dallas officers, Obama rebuked all of America for its “bigotry,” but paid special attention to alleged police bigotry:

“When African-Americans from all walks of life, from different communities across the country, voice a growing despair over what they perceive to be unequal treatment, when study after study shows that whites and people of color experience the criminal justice system differently. So that if you’re black, you’re more likely to be pulled over or searched or arrested; more likely to get longer sentences; more likely to get the death penalty for the same crime. When mothers and fathers raised their kids right, and have the talk about how to respond if stopped by a police officer—yes, sir; no, sir—but still fear that something terrible may happen when their child walks out the door…. When all this takes place, more than 50 years after the passage of the Civil Rights Act, we cannot simply turn away and dismiss those in peaceful protest as troublemakers or paranoid.”

The irresponsible zealotry of this rebuke was stunning. Obama was fully on notice that the hatred of cops was reaching homicidal levels. And yet his commitment to prosecuting his crusade against phantom police racism trumped considerations of prudence and safety, on the one hand, and decent respect for the fallen, on the other….

It is possible that the Dallas killers and the Baton Rouge killers had not heard Obama’s most recent speeches on criminal-justice racism, or even the many that preceded them. But even if the cop murderers had not encountered Obama’s exact words, the influence of his rhetoric on the hatred in the streets is absolute. Obama’s imprimatur on the Black Lives Matter demagoguery gives it enormous additional thrust and legitimacy, echoing throughout public discourse into the most isolated corners of the inner city.

Obama’s false claim that the death penalty discriminates against blacks is rebutted by cold, hard facts and statistics. As John Lott notes, this claim “is simply false. In murder cases, whites are executed much more frequently. Nationally, from 1977, when the death penalty was reinstituted, to 2011, the last year for which the FBI has compiled data, 64.7 percent of those executed were whites, but whites committed only 47 percent of the murders.”

Admittedly, liberal journalists think the death penalty is racist because only 13% of all people are black, yet a higher percentage than that of executed people are black. But that higher percentage just reflects the higher black murder rate. More than half of all murders are committed by blacks, who are just 13% of the population. (See FBI, “2014 Uniform Crime Reports: Crime in the United States,” Table 43A, Arrests by Race, 2014.)

Blacks’ higher arrest and conviction rates reflect higher black crime rates, not a greater likelihood of being arrested for committing the very same crime, and not racism by police or the criminal justice system. Innocent blacks are not being “railroaded” or subjected to “mass incarceration.” Black victims themselves tend to identify their assailants as black. As City Journal has noted, “the race of criminals reported by crime victims matches arrest data. As long ago as 1978, a study of robbery and aggravated assault in eight cities found parity between the race of assailants in victim identifications and in arrests—a finding replicated many times since, across a range of crimes. No one has ever come up with a plausible argument as to why crime victims would be biased in their reports.” For example, 43.7% of all rapists in state prisons were black, according to a 1997 report by the Bureau of Justice Statistics, even though blacks are only 13% of the general population. (See Bureau of Justice Statistics, “Sex Offenses and Offenders“ (Feb. 1997) (NCJ-163392)).

In his July 7 speech right before the Dallas murders of five policemen, Obama pointed to racism in the fact that “African Americans are arrested at twice the rate of whites” and the fact that “the African American and Hispanic population, who make up only 30 percent of the general population, make up more than half of the incarcerated population.” But these higher arrest and conviction rates are completely unremarkable, and not proof of racism, given the fact that the crime rate among blacks is several times higher than among whites. As Wikipedia notes, “According to the National Crime Victimization Survey in 2002, the black arrest rate for robbery was 8.55 times higher than whites…. Robberies with white victims and black offenders were more than 12 times more common than the reverse.[43][44]”

Nor are police shootings generally the result of racist white cops: as the Daily Wire notes, any such claim is contradicted by the following facts: “Black and Hispanic police officers are more likely to fire a gun at blacks than white officers. This is according to a Department of Justice report in 2015 about the Philadelphia Police Department, and is further confirmed that by a study conducted University of Pennsylvania criminologist Gary Ridgeway in 2015 that determined black cops were 3.3 times more likely to fire a gun than other cops at a crime scene…. Blacks are more likely to kill cops than be killed by cops. This is according to FBI data, which also found that 40 percent of cop killers are black.” Moreover, a “police officer is 18.5 times more likely to be killed by a black than a cop killing an unarmed black person.”

Hillary Clinton has also falsely claimed that there is “‘systemic racism’ in police departments” fueling “mass incarceration,” both before and after the murder of the five police officers in Dallas. 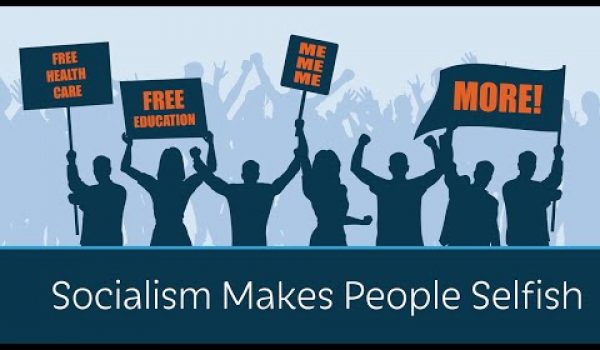 Video: Prager U on what’s wrong with socialism
Next Post
Tweet of the Day: Hillary Clinton’s reaction to the murder of 3 more cops