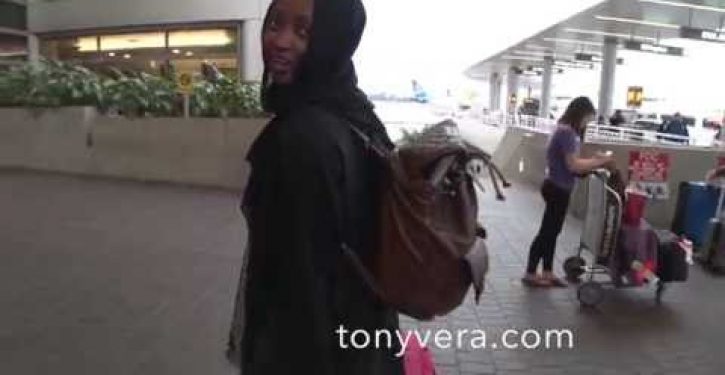 This incident was recorded by independent journalist Tony Vera on 14 June, two days after the nightclub attack in Orlando.

Conservative media have sent it viral in the last 24 hours, for obvious reasons.  The young woman, wearing a hijab, was briefly detained outside the international terminal at LAX while police conducted a search of her luggage.  The reason for the search isn’t explained, but at the very beginning of the video, we see the police talking to the driver of a cab, which it appears the young woman just got out of.  It’s possible the driver notified the police that he was concerned about her behavior.

In any case, she is allowed to proceed after the luggage search.  Tony Vera, the cameraman, gets her to talk to him as she is heading into the terminal.

The exchange between the woman and Vera starts just after the 7:00 mark.

The interesting aspects of this include:

1. The woman makes at least three threats to America and Americans involving “blowing us up.”  She wants to see us blown up because we are evil, we “allow lesbian and gay,” and we don’t accept Allah.

2. In spite of making these threats aloud, she is allowed by the police, some of whom are still standing only a few feet away, to walk into the terminal after her interview with Vera.

3. She becomes quite noticeably inarticulate and unable to come up with anything, when she is trying to express what Allah or his followers “love.”  (See the passage after about the 10:45 mark.)  But she has no trouble spitting out very specifically, by rote, the precept that Jesus is not God, but is just a prophet, like Mohammed.  She is perfectly articulate about killing people who reject Allah, and about things like raining down fire on infidels.

No great deductive powers are required to figure out what her Islamic education has concentrated on.

She reportedly was detained again by police after she had been in the airport for two hours, and was ultimately escorted from the terminal.

Exit question:  is there any other circumstance in which someone who had already been brought to the police’s attention, and who spoke repeatedly of bombing America, would be permitted to walk freely into an airport terminal – especially when the individual emphasized the evil of homosexuality, two days after a terrorist attack on a gay nightclub?

On 14 June, at the LAX international terminal, it could be considered pure, dumb luck that the police got a do-over with this woman.  During their first crack at her, the hijab was apparently a freaking get-out-of-jail-free card.

(Note: LU contributor Jeff Dunetz has written on more than one occasion about professional profiling methods that would be directly applicable in a situation like this one.  There really is no excuse for American agencies to bumble along cluelessly, when clues are taking turns whacking us in the head.  But a more fundamental point is really that our public authorities seem to start with an anti-profiling mindset; i.e., that we mustn’t react to a Muslim woman ranting about bombing America and about “lesbian and gay” being evil, and justifiably drawing down the punishment of death by murder — because “that’s just what they’ll expect us to do,” or something.  It’s becoming less and less believable that this is mere idiocy.)