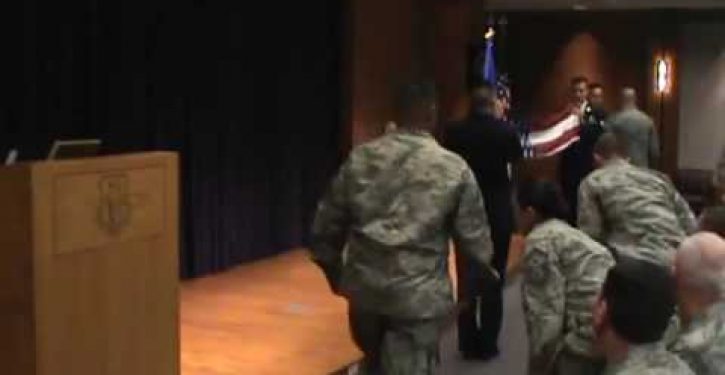 I’m beginning to think we need an additional “Category” for our posts here at Liberty Unyielding.  We have a round dozen of them covering topic categories — Politics, Media, National Security, etc — but in these trying times we apparently need one more: Evil.

Breitbart News reports this morning on the case of retired Senior Master Sergeant Oscar Rodriguez, a 33-year Air Force veteran who was asked by a retiring NCO, Master Sergeant Charles Roberson, to recite the traditional “flag-folding speech” at Roberson’s ceremony.

The speech is beloved of service members, although it was altered by the Pentagon in 2005 to remove all the original references to God.

For countless years, service members have given the “flag-folding speech” at military and civic events, including retirement ceremonies. Traditionally, this speech explains the colors, symbols, and history of the flag.

The flag-folding speech also contains several religious references, including, “Let us pray that God will reflect with admiration the willingness of one nation in her attempts to rid the world of tyranny, oppression, and misery. It is this one nation under God that we call, with honor, the United States of America.”

In 2005, the Pentagon changed the speech to remove all references to the divine, substituting additional historical facts such as Neil Armstrong’s planting of an American flag on the moon in 1969. But many service members prefer the traditional speech and desire that version given at their own retirement celebrations.

Rodriguez has made a name for himself reciting the flag-folding speech:

He has a clear and distinctive voice and is frequently asked to deliver the flag-folding speech at retirement ceremonies.

On April 3, 2016, Master Sergeant Charles Roberson was retiring from active duty. Roberson had heard Rodriguez give his stirring rendition of the traditional flag-folding speech and asked Rodriguez if he would give that speech at Roberson’s retirement celebration at Travis Air Force Base where Roberson served in the 749th Aircraft Maintenance Squadron.

But the elimination of references to God from military ceremony and tradition is a policy move of rigid intolerance and hatred.  Unlike the former conditions prevailing when the flag-folding speech contained references to God, it is not permissible now for service members to make their own choices about the speech.  A serviceman before 2005 who did not want allusions to God in the flag-folding speech could have had them removed by his chosen speaker without exciting official concern from the chain of command.  But the same freedom doesn’t apply to service members who now want to include the traditional references to God.

That freedom has been stripped from our uniformed men and women.  And at least one of the military services we pay for now enforces the rigid exclusion of God from ceremonies that incorporate the flag-folding speech.  Just how rigidly this enforcement works is on display in the video clip featured at Breitbart.

The point here is not that the military is enforcing rigid rules.  I was probably in the military longer than almost everyone who will read this, and don’t need lectures on the culture of institutional enforcement in the military — a necessary culture, given the military’s mission.

The point here is what is being enforced.  Your uniformed airmen are now being paid to forcibly drag a fellow vet who spoke the word “God” aloud from a military ceremony — to which he was invited, for the very purpose of saying “God” aloud — and ultimately force him physically off the military base.

I don’t think most Americans really need tutoring in what’s wrong with that.  Quite a few of the younger ones probably need instruction in how exactly it mirrors the activities of Hitler’s brownshirts in Nazi Germany, however.  There is no scenario in which this type of attack by the state on the people is compatible with the healthy, peaceful exercise of the people’s rightful liberties.  This will get worse, and it will come to your doorstep — and into the center of your home, and your conscience, and your children’s future.  This is pure, unadulterated evil: not a warning of its likelihood, but the actual evil, already making its home in our midst.