A new report indicates that criminal immigrants released back into the general population during Barack Obama’s first term in office committed new offenses — including rape, child molestation, and murder — at much higher rates than the administration suggested.

Via the Boston Globe:

They were among the nation’s top priorities for deportation, criminals who were supposed to be sent back to their home countries. But instead they were released, one by one, in secret across the United States. Federal officials said that many of the criminals posed little threat to the public, but did little to verify whether that was true.

A Globe review of 323 criminals released in New England from 2008 to 2012 found that as many as 30 percent committed new offenses … a rate that is markedly higher than Immigration and Customs Enforcement officials have suggested to Congress in the past.

The report provides examples of those who committed such heinous crimes after being released, including a man who was supposed to be deported after serving jail time for bashing his ex-girlfriend in the head with a hammer. Instead, ICE released the criminal, who in just a few months time found that same ex-girlfriend and “stabbed her repeatedly.”

While ICE was claiming that criminals who were supposed to be deported posed no threat to the public, the agency made no attempts to ensure its claims were true. The releases were carried out in such a manner that “crime victims, law enforcement officials, and managers of sex offender registries” were “often unaware” of them.

At a recent hearing by the House Oversight and Government Reform Committee, ICE released staggering numbers on criminal immigrants being allowed to escape the system.

If the Globe’s findings are indicative of the numbers as a whole, the 30% rate means nearly 26,000 criminal immigrants would have reoffended during that time. That’s tens of thousands of people made victims of violent crimes unnecessarily.

At that same House oversight hearing, committee Chairman Jason Chaffetz asked Saldaña “How do you look those people in the eye?”

Wait, what? THIS is why San Jose cops didn’t stop attacks on Trump supporters?
Next Post
Is Obama really as obtuse as his debate with a gun-store owner suggests? 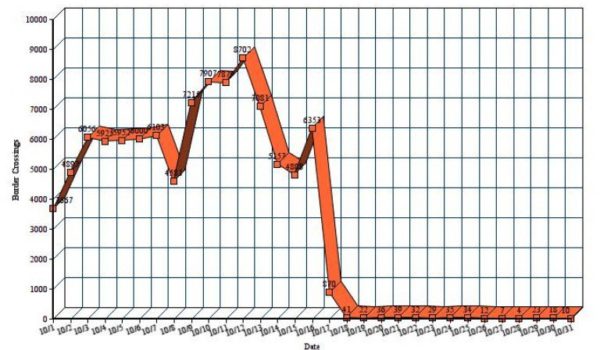