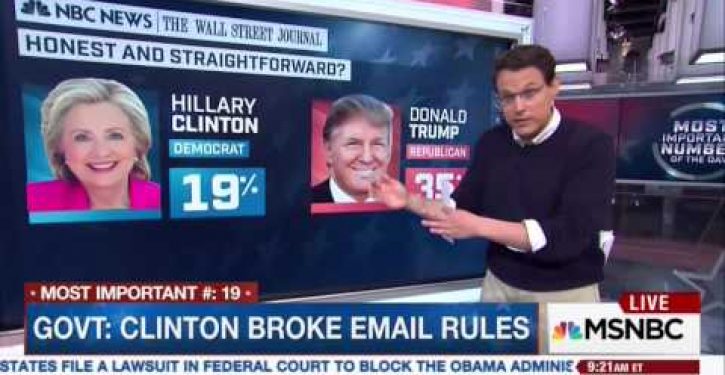 What word immediately comes to mind when you think of Hillary Clinton?

Sure, “liar” is almost a certainty. Hillary has consistently struggled in polling when it comes to honesty and trustworthiness. And this recent viral video of her lying for 13 minutes straight doesn’t exactly help. In fact, a brand new poll shows that only 19% of voters consider her “honest and straightforward.”

It is another word associated with the presumptive Democratic nominee, however, that might surprise you in a hilarious sort of way. MSNBC’s Steve Kornacki had to deliver the heartbreaking news to his viewers.

The two words most associated with Clinton are “liar” and … “nauseated.”

Via the Daily Caller:

Kornacki acknowledged that the email report “could bring [Clinton’s honest numbers] even lower.”

Watch the segment below:

Kornacki noted that Donald Trump’s numbers on the issue of honesty are fairly bad as well. In fact, in any other election cycle, his 35% polling number would be considered terrible. Yet, that is nearly double what “Crooked Hillary” is getting these days.

This screen grab from the MSNBC segment is absolutely devastating:

It’s also interesting to note that one of the phrases that shows up is “moving to Canada.” We’ve seen countless stories of celebrities saying they’d move out of the country if Trump is elected, but we haven’t heard a thing about it when it comes to Hillary. The media might want to get on that.