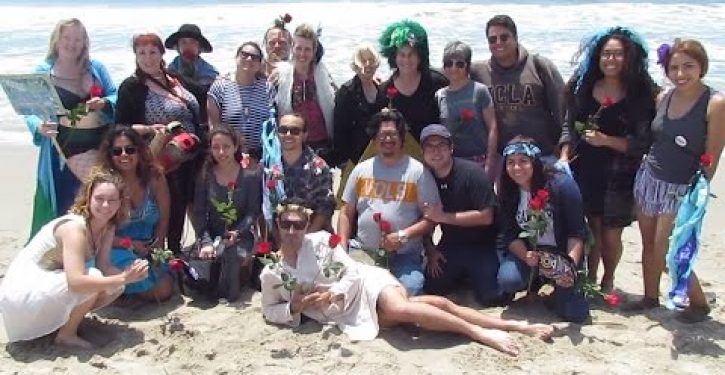 Barack Obama’s days as president are swiftly drawing a close (if not swiftly enough for some). But in the time he has left before the movers show up at 1600 Pennsylvania Avenue, he intends to do more — much more — in the name of social engineering. Last week, his Department of Health and Human Services implemented a rule change to the Affordable Care Act that requires all hospitals receiving taxpayer dollars to agree to perform sex-change operations or lose their federal funding.

Although it’s probably not on his agenda yet, the president should perhaps be made aware of EcoSexuals and their cries for recognition.

EcoSexuals are, as an analysis of the word into its constituent parts reveals, people who are in love with nature — including in the carnal sense. Earlier this month, a group of them, all students at Santa Monica College, tied the knot, though not to each other. Rather, they “married” the ocean.

Amber Katherine, a philosophy professor who helped organize the May 14 event, explained to Campus Reform that the purpose of the “wedding” was to bring about a deeper love for the planet through “ecocentric passion and even lust.” [Emphasis added]

The ceremony began with Bruce Cartier, a former SMC student, proclaiming to those gathered at Santa Monica Beach that “today we stand upon this holy earth and in this sacred space to witness the rite of matrimony between the sea and us all.”

In case you are assuming this is all just metaphorical (and, if you are, please explain to me the highlighted phrase in the blocked quote above), be advised that participants each received a ring (no, it was not delivered up from the briny depths!) and took this solemn oath:

With this ring, I bestow upon the sea the treasures of my mind heart [sic] and hands — as well as my body and soul.

Then they “consummated” their marriage by dipping a toe — or other body part — in the ocean and made “love with the water.” (I for one am not interested in the intimate details.)

One attendee of the event — who identified herself only as “Serenity” [what else?] — spoke about the importance of gaining consent from the earth before proceeding with a physical relationship.

“Back when I would hug trees in Santa Cruz, I would sort of ask the tree if it was okay if I hugged it and I would feel their spirit or energy or something give a response back, and then proceed accordingly,” she told The Corsair [a student newspaper]. “Consent is definitely important. Do you think the Earth would consent to fracking and pollution? Probably not.”

All of this presupposes that nature somehow speaks back to them, making its mutual affection (or lack thereof) known. Maybe they are endowed with a sixth “dog whistle”-type sense. Or maybe they’re just stark raving nuts.

In any case, polygamy is illegal in the United States, which calls into question whether this particular ceremony is kosher. The answer, of course, depends on whether the ocean has an awareness of any of this.