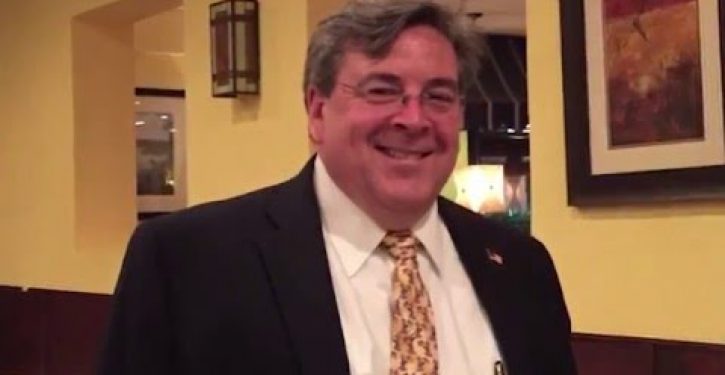 It appears the silly season in politics has become a year-round event with the current presidential race. Nowhere is this better exemplified than in the figure of speech that Florida GOP official Bob Sutton devised for potential debates between Donald Trump and Hillary Clinton.

Sutton, who is chairman of the Broward County Republican Party, could have used any number of similes to describe how Hillary is going to lose to Trump.

He could have gone with ‘Trump is going to beat her like an egg.” Or, “Trump will beat her like a rented mule,” which would even seem witty considering the Democratic Party symbol.

Even the metaphor used by a Democratic strategist earlier in the week, that Trump will beat her like “a baby seal,” would have been more acceptable (for everyone but PETA).

Instead, Sutton told the Washington Post that Trump is going to beat Hillary so badly, she would … well, have a listen for yourself.

Via the Sun Sentinel:

Lewinsky was, perhaps, the most famous White House intern in the nation’s history. What became known as the Lewinsky scandal involved a sexual relationship between her and then President Bill Clinton, something he called an “inappropriate relationship,” in 1995 and 1996. The oral sex that was part of their relationship received enormous public attention at the time.

Eventually it led to Clinton’s impeachment by the House, but he wasn’t convicted by the Senate, remained in office, and has become a popular former president who often campaigns for his wife.

The secretary of the county Republican Party, Kristin Matheny, chastised Sutton for making the comparison.

“As a woman, as a Republican, it’s not what I would have said,” she said, adding “I don’t endorse it in any way.”

“I think he absolutely needs to apologize,” Matheny said.