It’s April 2016 in America, and now, for the GOP, it “comes down to Indiana” next week – supposedly.  Meh.  Although there’s a possibility that Trump might lock up 1,237 delegates during the primaries, it still looks to me like it will actually come down to Cleveland.

Trump swept Pennsylvania, Connecticut, Maryland, Delaware, and Rhode Island on Tuesday, but then, we knew he was going to. [score]Ted Cruz[/score] managed to hold onto a narrow lead over John Kasich to come in second in Pennsylvania.  But Kasich took second in the other four states.

On the Democratic side, Bernie got a win in Rhode Island.  Hillary took the rest of the states.

More interesting than the win-lose results this week are the numbers.  Trump won for the first time with a substantial, absolute majority of the Republican votes cast in every state.  In Pennsylvania, a potential swing state, he came a lot closer to Hillary’s popular vote total than he did in New York a week ago, drawing over 890,000 to Hillary’s 916,000-odd.  That has to make even Karl Rove sit up and take notice.

Although Sanders and Clinton both outpolled him in deep-blue Connecticut and Maryland, Trump also did much better head-to-head with their individual totals in Connecticut than he did in New York.

I have never considered Hillary a shoo-in, and I still don’t.  A number of things could change, and probably will, between now and November.  As different as April 2016 feels from April 2015, November of this year is likely to feel even more different from the April we’re in.  We don’t know what will weigh heaviest on our minds in November; we just know that the pace of change is accelerating.

So I basically dismiss all complacent assumptions that Hillary will inevitably win if Trump is nominated.  That said, it’s not clear what his path to the White House is.

His perceived momentum is unquestionably building in the Republican race, however.  Rush Limbaugh has reportedly said that he expects a huge blow-up if Trump is denied the nomination at a contested convention, and I see no reason to disagree with that.  Trump may be a plurality candidate, overall, not a majority candidate, but there is no question that he’s the front-runner.

That won’t be illegitimate, per se, but it will be fatal.  There is, in fact, no scenario in which the Republican Party continues to be what it has been during our lifetimes so far.  It’s not the party of conservatism or small government if it nominates Trump.  But at this point – in terms of probabilities, based on what we know – it falls apart if it doesn’t.

What about Ted Cruz?  He will very much need a serious boost in Indiana to keep perception on his side.  Most of you know I’m a Cruz supporter.  I hope he’ll get that boost, although there’s no way Cruz can get to 1,237 before Cleveland.  So why do I want to see Cruz get his boost?

Because at this point, I’m looking beyond 2016, to the crack-up of the familiar structure of our old “normal.”  It’s going to crack up, period.  There is no other option.  Unless there is a miracle and the GOP rallies behind Ted Cruz, the only thing that will matter about who’s elected this fall is how badly he or she will perform under the tectonic stresses of the coming years.

There is no going back.  We cannot recapture a moment in the past and reset to it.  This is why no candidate secretly favored by the old-consensus GOP is our “answer.”  The only thing any of them knows how to do is go back.

They are reasonably good people, for the most part, but their insight in each case is some combination of limited, theoretical, and technical.  They don’t know how to hew to a course under unbearable stresses that test their most basic beliefs.  In a storm that loosens every lashing and makes the ship of state shudder and groan, they don’t know why they believe what America most desperately needs them to believe, and act on.  They don’t live and breathe the “why.”  They rely instead on the comforts of normality: on the support of a crowd, and on not having to make epic choices under intense duress.

Cruz shows that he does live and breathe the “why.”  Some people have made fun of his relentless readiness to talk principle and philosophy – limited government, federalism, constitutionalism – but the truth is that he’s talking about what America, in terms of political direction, most badly needs to focus on.  If we don’t have someone competent to parse and relate these concepts, there will be no one who can see a way from where we are, at a given moment, to where we aspire to be.

So I want to see Cruz remain a significant actor on the national political stage, even if it doesn’t ultimately make sense to make him the nominee this year.  I haven’t given up on the nomination, but it would probably hurt him and the GOP, more than it helped either, if he straggled into Cleveland with no momentum from the last round of primaries, and had to be foisted on the party in a second or third vote on the convention floor.  (I doubt the party bigwigs want him in that role anyway.  If they’re going to try to play that card, they’ll push for someone they like better.)

Whether for an outside 2016 shot or America’s longer-term future, Cruz needs to show he can generate voter enthusiasm between now and then.

We’ll dispense with the graphics from tonight’s work.  They all tell the same story.  Heck, even Charles Krauthammer has finally acknowledged that he was wrong about Trump’s political viability.  As for this year’s Democrats, just remember: the ash-heap of history can’t be avoided, for those who are on a collision course with it. 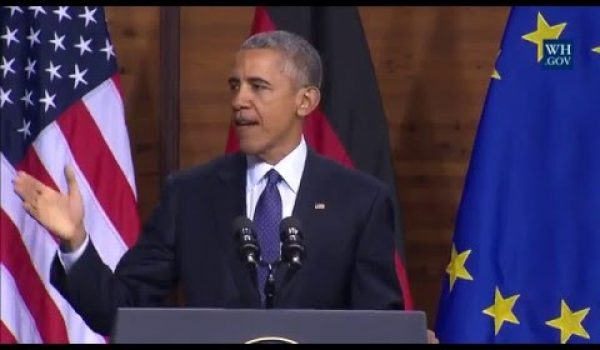 Obama: ‘We are living in the most peaceful era in human history’
Next Post
ISIS offers marriage counseling to stop jihadi brides from fleeing