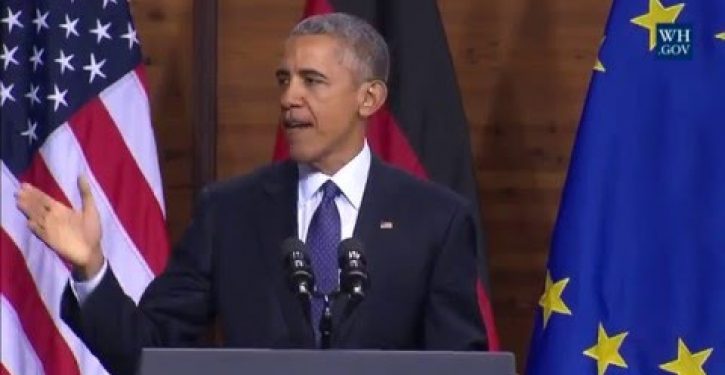 At a certain point, you run out of words.

There have been several occasions in recent years when it seemed like Obama had just spoken famous last ones.

There was June of 2015, when he proclaimed that he had made the U.S. once again “the most respected country on earth.”

A year before that, in June 2014, Obama announced that the world was “less violent than it has ever been.”

Just weeks before assuring us violence was at an all-time low, Obama uttered one of those end-of-an-era type judgments, the kind that’s begging to be proved wrong and become an emblem of civilizational self-delusion, when he purported to tell us “how wars end in the 21st century.”

Please: we haven’t figured out how wars start in the 21st century, much less how they might end.  When it comes to the 21st century, we have no clue what we’re doing — and we’re not getting closer to scoring at the clue-mart; there seem instead to be Vandals sacking and looting it, and preparing to burn it down.

It’s not quite clear what the purpose is for Obama’s series of apparently deranged proclamations.  It could be something as simple as planting a narrative that validates his prom-king coronation with the Nobel Peace Prize in 2009, when he’d been in office less than a year and hadn’t had time to actually do anything yet.

But what we do know is that he’s at it again.  Speaking in Germany on Monday, he opened up with both barrels (transcript from Susan Jones at CNSNews):

“I want to begin with an observation that, given the challenges that we face in the world and the headlines we see every day, may seem improbable but it’s true. We are fortunate to be living in the most peaceful, most prosperous, most progressive era in human history,” he said.

“That may surprise young people who are watching TV or looking at your phones,” he said, “and it seems like only bad news comes through every day, but consider it’s been decades since the last war between major powers.”

Sure, Syrians who have somehow survived the last five years — the UN now puts the Syrian death toll at 250,000; some NGOs think it’s nearly twice as high — can at least congratulate themselves that their family members and neighbors haven’t perished in a war between major powers.  Because that would be really bad.

The interesting thing is that Obama has affected all his life to be a member of the special class that has “smart” vision and insight; that isn’t stuck evaluating the world in the old, outdated frameworks of prejudice and oppression.  Yet in 2016, when it is blindingly obvious that the old structure of international relations is falling away, and it doesn’t matter that “major powers” are not “at war,” because borders are falling and peoples are fleeing and a whole civilization is being overwhelmed just as if they were, it’s Obama who is standing before an audience of Germans telling them there’s never been so much peace in the whole history of man.  Because all he can see is the narrow point that “major powers” are not formally “at war” with each other.

He says it with a straight face.  You can see that in the video.  Does he mean it?  We report; you decide.

(The strange passage is in his opening remarks.  If you want to go directly to it, CNSNews has an MRC-TV excerpt.  But you’ll miss the chummy giggling at the very beginning, with Angela Merkel and the attending dignitaries, if you choose that option.)

John Stossel and the lengthy process of being denied a carry permit in NY
Next Post
Trump soars; die is cast for a GOP crack-up; meanwhile, Dems’ same-old isn’t the ‘future’