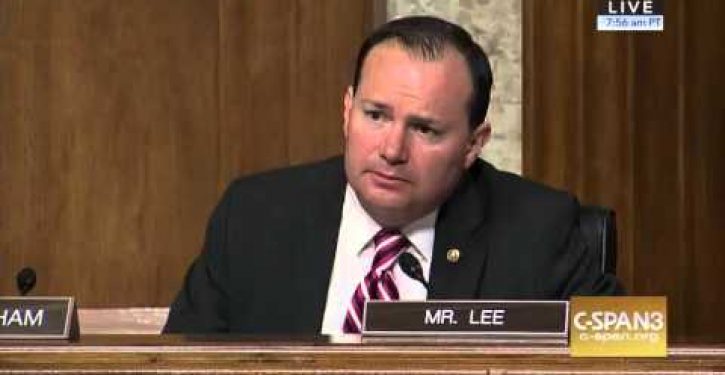 A nice little lesson here in how framing the proposition the wrong way leads to a biased conclusion.

Milley responded that personnel security for recruiting stations is best managed by local commanders, who are familiar with the level of risk, local laws, and other related conditions.  He stipulates the following about the conditions of carry:

[S]ome of the constraints on that: people have to be trained, it must be a government owned weapon, can’t carry privately owned weapons, et cetera.

But here is how he responded on the question of individual soldier carry on bases.  (Video below.)

Note that Senator Lee did not mention concealed carry, with all that implies, in his question.  It’s the general who frames the issue in those terms:

Milley then answered about larger bases, saying that his preference for increased security is that it would be better for more police and guards.

On a military base, the going-in proposition should not be that someone with a concealed weapon might be ready to respond if an attacker starts pumping rounds at people.

The going-in proposition should be that a military base is a hard target because a lot of qualified, trained soldiers (in the case of the Army) are walking around with regulation sidearms in regulation holsters, out where everyone can see them.  Deterrence should be the organizing idea, more than reaction.

Of course there should be rigorous qualifications for this, including (in my view) a minimum grade, or rank, requirement, and a commanding officer’s formal permission, granted only after a soldier meets demanding criteria.  This responsibility isn’t for the most junior soldiers in the enlisted ranks.  It would have to be attended by rules that were part of an entrenched culture of firearm safety and responsibility.

But that last sentence is the key.  General Milley speaks from the mindset of an American culture that has come to treat firearms as too dangerous for the people to be trusted with.  The culture sees the people themselves as inherently untrustworthy, for a number of important purposes.  One of those is being armed, and able to defend yourself and defuse situations in which people’s lives are at risk.

There is a whole world of prejudicial assumptions behind the premise that all handling of dangerous situations must be left to those formally chartered for law enforcement.  Those assumptions have gone unexamined in American public discussions for decades now.

Ultimately, the bias against seeing the people armed – even trained soldiers on a military base – is a bad trend that works to the advantage of excessive, improper government.

I have the greatest respect for General Milley, and I understand his concern about the administrative challenges of allowing soldiers to go armed on military bases.  The challenges are real.  It’s not like they’ve never been faced before; keeping everyone disarmed, by default, on a military base is a relatively recent development.  But changing the culture back to accepting armed soldiers as a baseline would unquestionably require effort and adjustment.

What Americans need to understand is that the members of the top military brass are not going to push for that.  Now that they don’t have to administer their forces on that basis, it just looks to them like a headache.

The people themselves have to decide that’s how they want their military to operate – because it’s how Americans live.  Not everyone has to embrace the armed life, with its serious responsibilities.  But those who don’t choose it must not be able to set the limits of fear and ignorance on those who do.

Bernie has crossed a line, and now some libs are turning on him
Next Post
Great news: Grand opening of a new ISIS branch in East Africa