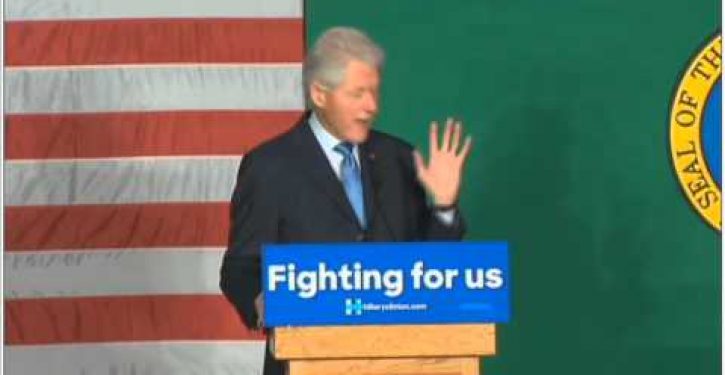 Former president Bill Clinton went off script at an event in Spokane, Washington, calling the last eight years (aka, the Obama presidency) an “awful legacy.”

Granted, it’s completely accurate to say that the Obama presidency has been an awful. Still, one has to wonder when accuracy ever became a staple of the Clinton family.

To be sure, Clinton also took a shot at George W. Bush in his comments, but considering that his wife is running for a de facto third Obama term, the campaign had to have recoiled in horror when he made the comments.

GOP.com has the transcript of Bubba’s comments. The video follows.

I literally from the time I met her 45 years ago. Until we talked yesterday, she is the best change maker I have ever known. She always finds a way to make something good happen, to make people feel empowered, to buy people into the process, to make democracy work the way the framers intended for it to work.

But if you believe we can all rise together, if you believe we’ve finally come to the point where we can put the awful legacy of the last eight years behind us and the seven years before that where we were practicing trickle-down economics with no regulation in Washington, which is what caused the crash, then you should vote for her. [Emphasis added]

Because she’s the only person who basically has good ideas, will tell you how she’s going to pay for them, can be commander-in-chief, and is a proven change maker with republicans and democrats and independents alike.

Team Clinton will naturally try somehow to spin the comment, which should be fun to watch if nothing else. It will also be interesting to see whether black leaders pick up on the comment. One of them, former former NAACP president Ben Jealous, has already endorsed Bernie Sanders. Will others now follow suit?