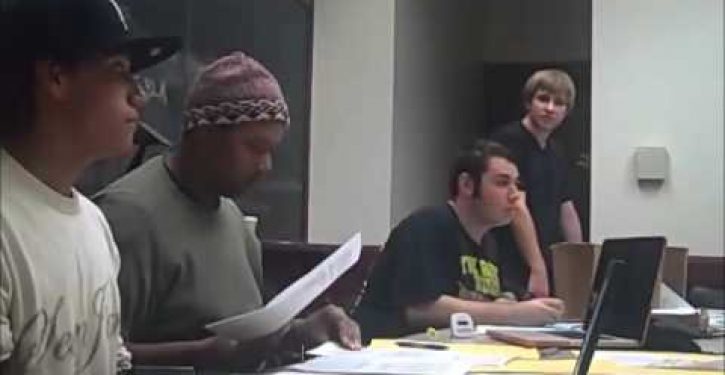 And you thought the GOP debates with Donald Trump were bad.

A video has gone viral in the last week, showing a pair of debate contestants from the University of West Georgia urging their white opponents to kill themselves, implicitly as an act of racial atonement.  The debate venue is reportedly Harvard; what hasn’t been made clear in the most-linked posts on it is that the debate took place in 2012.

The two debaters arguing that white people should kill themselves are Damiyr Davis and Miguel Feliciano, then students at UWG.  The topic of the debate was U.S. energy policy.  The Cross-Examination Debate Association (CEDA), which sponsors a national tournament every year, posed the resolution as follows for the 2011-12 academic year:

If it seems a bit peculiar for a debate on this resolution to go off on a white-racism tangent, we’ll get to that in a minute.  First, a flavor of the “argument” points from the UWG team (courtesy of EAG News and its cited sources; you can hear most of this spoken clearly in the video):

“White life is wrong,” Feliciano was quoted as saying by Infowars.com. “Our argument is that we should never affirm white life. White life is based off black subjugation.”

When a white debater asked Feliciano whether he should commit suicide, Feliciano said “I don’t see why not, it’s ethical.”

When the white debater suggested that it might be better to remain alive and fight the social forces that promote “white privilege,” Feliciano rejects the notion.

“Struggling against the structure means putting yourself on the line, putting your body on the line, do it. Affirmative suicide, that’s cool, it’s one little step in the right direction,” Feliciano said, according to Infowars.com.

Ironically, the debate topic was supposed to be about renewable energy.

“The black debaters simply ‘chose’ to point out their opponents’ skin color and begin advocating genocide,” reported InvestmentWatchdogBlog.com. “They expressly stated that these were their ‘sincere beliefs,’ not just an argument to win a debate.”

If you check out the documentation at the YouTube channel where the video was posted on 14 March, you’ll see links to the full, unedited videos of the debate, which were originally posted at Vimeo.  The videos at those links have since been removed, presumably because the “whites should kill themselves” portion has now gotten so much attention.

Technically, it’s incorrect to claim that Davis and Feliciano were BLM activists, at least at the time of this debate.  That’s because it took place in 2012.  (The EAG profile of them on social media indicates they have joined forces with BLM-linked activist groups in the years since, however.)  Black Lives Matter, per se, was launched after the Michael Brown shooting in Ferguson, Missouri in August 2014.

The University of West Georgia confirmed that the debate was from 2012, when the school posted a statement on the video on Thursday.  West Georgia said “the students’ comments included in the video do not reflect the values of our university. They do not represent beliefs or doctrines we teach to students.”

But we are left to wonder what the university does teach its students, given the explanation offered for why Feliciano and Davis said white lives shouldn’t be affirmed, and white people should kill themselves.

In the case of the 2012 video, the debate centered on energy policy. The first team argued that white people embracing the location of wind turbines in their neighborhoods would be a way to address criticism that racism is inherent in the movement of white populations from urban areas. The former UWG students countered that argument by claiming that the extreme would not be for white people to locate themselves near wind turbines, but rather for white people to sacrifice themselves to remove racism altogether.  The purpose of the statement was to show the absurdity of their opponents’ position.

This is idiotic.  If UWG wants to go on an absurdity hunt, it should start with its own buried premises in this explanation.  (If you don’t see what’s absurd, we can discuss that in the comments section.)

But you can also bet your bank balance that the issue of “white racism” was not brought up by the first team.  We can be sure the first team was naively trying to argue the actual proposition about energy policy, without introducing “racism” into the exchange.

Symptom of a larger problem

In any case, idiocy seems to have become the winning trait on the CEDA debate circuit.  For an interesting comparison, revisit the 2012 video clip above between the 35- and 38-second mark.  See how Miguel Feliciano literally huffs and puffs angrily as he spits out his point.

Now consider a series of clips from the winning debate team in the CEDA tournament two years later.  Commentator Peter Schiff interwove the clips, taken from the original full-length debate video, with an interview Fox did with the winners, Korey Johnson and Ameena Ruffin of Towson University.  (This pair was the first female African-American team to win the CEDA tournament.)

The purpose here is not to embarrass the Towson team or the UWG team.  But these videos can’t help embarrassing the administrators of collegiate debate forums, who apparently now reward this style of anti-debate by giving it prizes.

You won’t be surprised that when the Towson team won in 2014, much of the leftosphere rushed to embrace the new mode of “performative debate.”  (Groundwork had been laid for this moment for a number of years, but it took a while for the staid keepers of debating standards to sign their unconditional surrender.)

Unfortunately, Johnson’s and Ruffin’s auspicious victory has been marred by right-wing trolls in the debate community and well-meaning white liberals, too, who have mischaracterized and minimized their victory, attributing their win to white liberal guilt, rather than meritorious performance.  …

The rise of the Urban Debate League movement in the late 1980s helped to diversify debate at both the high school and college level by providing debate instruction and attendance at camps and tournaments for free or for significantly reduced costs. … Korey and Ameena learned to debate in the Baltimore Urban Debate League, many years after my tenure as a volunteer there.

The increasing racial diversity of college debate is directly attributable to the work of these leagues, but of course the presence of more Black folks in any space also fundamentally challenges the ground upon which business proceeds. Black students have not only excelled at traditional debate, but they have invented new modes of competitive forensics, including a more performative style of debate that incorporates rap music, poetry and personal anecdotes.

Pioneered in college debate programs like that at the University of Louisville, this more performative style of debate has productively disrupted the traditionalist forms of debate centered on spouting, at the highest rates of speed, copious amounts of academic literature in order to prove a point.

Indeed, “performative debate” has shifted the style: away from spouting facts, and toward alleging racism and lobbing trigger words like grenades.  Cooper describes how the two teams in the final debate of the 2014 tournament approached their topic, which was about presidential use of war powers for things like targeted killing and indefinite detention:

In the final round, the Oklahoma team, who took the affirmative side, offered a performative argument that “war powers should not be waged against ni**as.” Using the colloquial form of the n-word, they sought to disrupt the very assumptions of the resolution, by placing the relationship between race and U.S. militarism front and center.

The intrinsic moxie and audacity of this kind of argument exposes the flaws in traditional forms of debate performativity. In part, they demonstrate that an investment in cool, detached, dispassionate forms of speech about political matters of such import could in their own way be considered pathological and imperialist.

But somehow, the Towson team managed to outdo even this imperialism-exposing exercise in audacity and moxie.

Using a range of academic work, Johnson and Ruffin offered a counter argument that “we should not present scenes of suffering within the academy… because the academic machine will become a spectator that merely feeds its libido by consuming pain narrations.” Furthermore, Johnson writes, “we said that when we tell narrations of pain and suffering to black youth as a means of survival, this inhibits their political imagination because they can only envision similar violences happen[ing] to them.”

At the risk of sounding imperialistic, I do think the Oklahoma team’s approach, non-traditional as it may have been, was more on point.  But Cooper has me and everyone like me covered.

To mischaracterize and diminish [Johnson and Ruffin’s] accomplishment is the height of white elitist racism, and it is deeply rooted in an anxiety about the ways that Black people and Black forms of knowledge production fundamentally shift the terms of political discussion.

And who can argue that the terms of the political discussion were fundamentally shifted here?  The debate resolution was about whether the president should be restrained in his use of war powers – an important public policy issue, essential to our character as a nation.  The Towson team “argued” whether scenes of suffering should be presented within the academy.  There’s no way to get from their line of argument to a conclusion about what our policy should be on presidential war powers.

Since the Towson team didn’t succeed in actually debating the resolution, I’m hard put to call their disruption of traditionalist forms of debate “productive,” precisely.  I guess it depends on what you want to produce.

Look.  The examples of black people who’ve made superb rhetoricians, debaters, writers, analysts, and philosophers abound – and in distinctive voices of their own.  Black Americans have nothing to prove in that regard.  But there are a whole bunch of white and black Americans who ought to be ashamed of themselves for assuring these young people that they know how to “do something,” when they’ve mastered the art of rendering white people speechless by playing the race card, getting out of breath, and theatrically deploying trigger words.

Wherever the taxpayer’s money is being spent to keep these administrators in their jobs, it should be yanked.

Let’s keep our eyes, as they say, on the prize.  The problem is that our entire system of public institutions has become dedicated to encouraging this nonsense.  The condition has been building for decades, and that’s why we’re now getting it as such a frequent type of output.

The temptation may be strong to focus on the poorly-advised kids in these videos.  But I’ll take a moment here to thank God for the ones who make it through college today without being duped and brainwashed.  A lifestyle of resentment is a terrible slave-master.