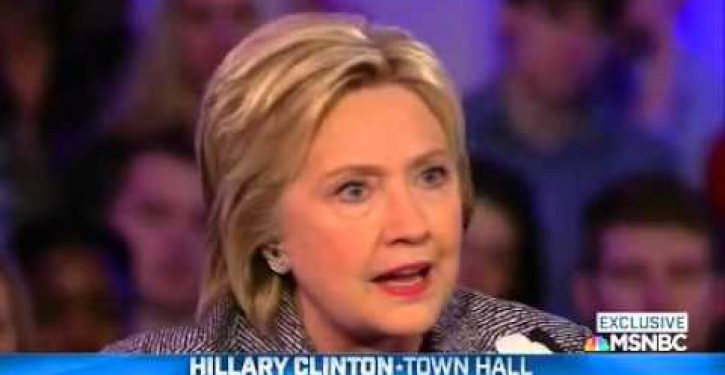 Despite her appearing to have a relatively unencumbered path to the Democratic nomination and possibly the White House, former Secretary of State Hillary Clinton, has made some claims and promises on the campaign trail that could come back to bite her.

Among these is her recent assurances to the attendees of a townhall in Columbus, Ohio, that if elected she is “going to put a lot of coal miners and coal companies out of business.” In a state that employs tens of thousands of coal miners and derives nearly 70% of its electricity from coal, that sounds like a fairly ill-advised promise.

But it can’t hold a candle to a boast she made last night to MSNBC’s Chris Matthews. The topic was her position on regime change in Libya in 2011. The video follows, and this is one of those moments where you have to rewind the video over and over again asking yourself, “Did she seriously just say that?”

During the course of her defense, Clinton actually uttered the words “Libya was a different kind of calculation, and we didn’t lose a single person.” [Emphasis added]

Obviously, the families of Ambassador Chris Stevens, Glen Doherty, Tyrone Woods, and Sean Smith would have a different take on the loss of American lives.

This certainly casts her “what difference does it make?” comment in a whole new light.

Recently, Pat Smith, mother of Sean Smith — whom Clinton accused of lying — said “there’s a special place in hell for people like” Clinton.