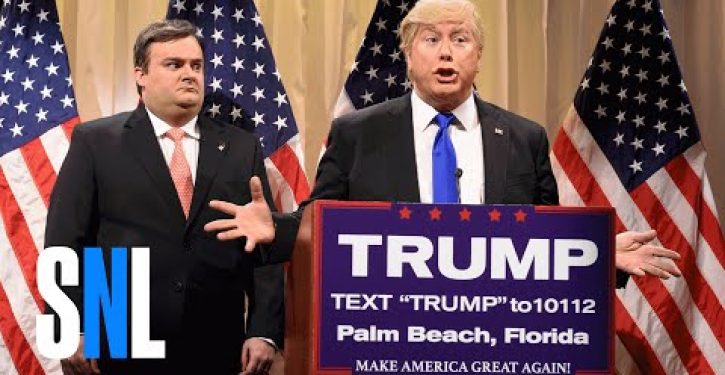 During the show’s cold open last night, ex-cast member Darrell Hammond returned to reprise his Donald Trump imitation. Hammond is a much funnier comedian and a far better mimic than any of the current cast members, and clearly they needed their best performer to deliver the memorable line, “P.S., America, I have a great big huge d*ck!” The mouth breathers in the audience went wild.

They also enjoyed the comments by Hammond-Trump that led up to that priceless line, which included this knee-slapper:

I am running the best campaign, aren’t I? The media’s saying they haven’t seen anything like this, not since Germany in the 1930s.

They are also had some choice words for Trump supporters:

I mean everyone loves me: racists, ugly racists, people who didn’t even know they were racists….

Apparently, the writers weren’t sure the message took, because shortly after, they were back on the Trump-supporters-are-racist theme again with a mock-commercial revealing how the average American feels about Trump. Deadline’s Jeremy Gerard describes the bit:

The love-fest included Bobby Moynihan as a house painter on a ladder (“He’s the only one who’s actually created jobs”), Vanessa Bayer as a housewife at the ironing board (“He’s authentic”) and Beck Bennett as a suburban squire (“I don’t know what it is — I just like the guy), singing the candidate’s praises for being honest, telling it like it is, for the people, etc. etc. As the camera pulled back from the subjects, Taran Killam was revealed to be wearing a Nazi armband; Bayer was ironing a KKK uniform; Moynihan had just painted “White Power” on the side of a house and Bennett was tossing books on the fire in his fireplace. “Racists For Trump” read the sign-off as the faux-commercial came to an end. It was funny — in a scorched-earth sort of way.

A number of celebrities, the latest being Miley Cyrus, have said they’ll leave the country if Trump is elected president. If that includes the cast and writing crew of SNL, voting for The Donald begins to have its appeal.