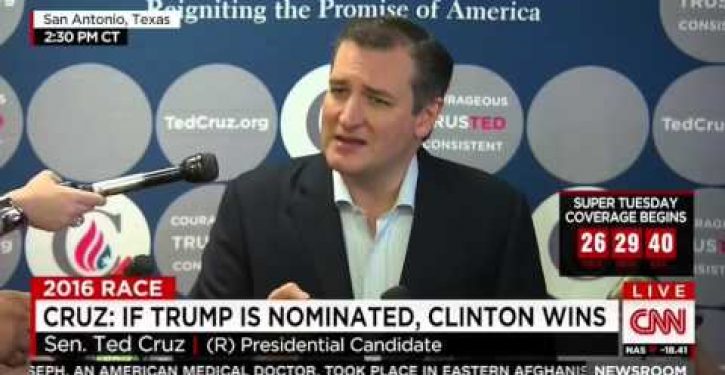 One of the main bones of contention in last night’s pie fight at the Fox Theater in Detroit (read: Republican presidential debate) was the off-the-record conversation The Donald had in January with the editorial board of the The New York Times.

Trump was dared by Senators[score]Ted Cruz[/score] and[score]Marco Rubio[/score], who flanked him on either side, and even the Fox News moderators, to order the release of the tapes of the conversation, to prove he has nothing to hide.

According to Buzzfeed Editor-in-Chief Ben Smith (via Gateway Pundit) Trump reportedly told the Times that his extreme position on the deportation of all 11 million illegal immigrants currently residing in the U.S. was fluid and developing. Here is Cruz breaking the story the day before Super Tuesday.

It also seemed very promising to those bent on bringing Trump down. If you are among them, be advised that you’ve been “trumped” again:

HUGE NEWS:
NYTimes says there is NOTHING IMPORTANT in the Trump Tapes!https://t.co/LCWW5toOeY

The latest from Navy Sec. Ray (‘Women in Combat’) Mabus may make you smile
Next Post
Jim Webb: Won’t vote for Hillary, but might for Trump