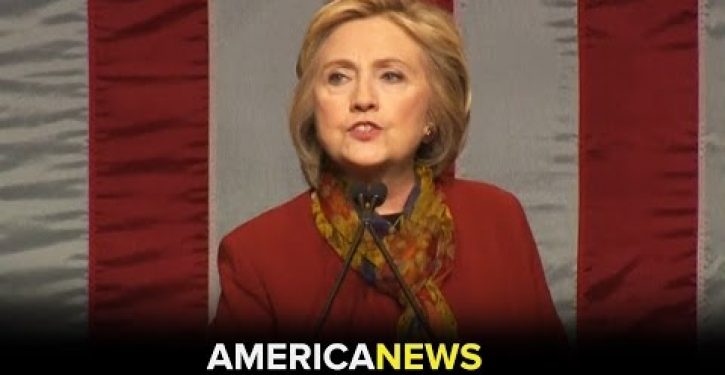 On Wednesday, Opposing Views, a site that offers opinion from both sides of the ideological spectrum, released an annotated version of a video of remarks Hillary Clinton made regarding the decision that now faces our nation’s leaders in the wake of SCOTUS Justice Antonin Scalia’s death.

After noting that Republicans have vowed to block any appointment Barack Obama might make to fill the void, she goes into full attack mode:

Many Republicans talk in coded, racial language. They demonize President Obama and encourage the ugliest impulses of the paranoid fringe. This kind of hatred and bigotry has [sic] no place in our politics of our country.

Those are some powerful charges. You’d expect that any politician making them would have a closet free of skeletons. If candidate Clinton had bothered to check, she might have stumbled upon a shoebox or two filled with unpleasant reminders of the way she and her husband treated Barack Obama during their contentious and hard-fought 2008 presidential campaign.

She might have unearthed a clipping from a column penned for GQ by the late Michael Hastings. In it, Hastings, who was following Clinton on the campaign trail, wrote about an unsettling experience in Youngstown, Ohio:

We were in a high school gym, and Hillary was being introduced by Tom Buenbarger [sic: Buffenbarger], who heads up the International Machinists Union. Bused-in union members cheered and chanted….

Buffenbarger launched into a rant in which he compared Obama to Muhammad Ali, the best-known black American convert to Islam after Malcolm X. “But brothers and sisters,” he said, “I’ve seen Ali in action. He could rope-a-dope with Foreman inside the ring. He could go toe-to-toe with Liston inside the ring. He could get his jaw broken by Norton and keep ghting inside the ring. But Barack Obama is no Muhammad Ali.” The cunning racism of the attack actually made my heart start to beat fast and my ears start to ring. For the first time on the campaign trail, I felt completely outraged. I kept thinking, “Am I misreading this?” But there was no way, if you were in that room, to think it was anything other than what it was.

Things got worse after that. The attempt [by the Clinton campaign] to smear Obama as a Muslim ratcheted up. A picture of him in Somali garb was leaked to the Drudge Report; soon after, a Clinton surrogate went on TV to say that Obama shouldn’t be ashamed to be seen in “his native clothing.” Finally, they even dropped the pretense of a cover when Clinton claimed in a speech that all the hardworking white Americans would vote for her.

She might have been been reminded of another column, this one by Ari Berman, writing for The Nation, titled “Racial Politics, Clinton Style.” From the piece:

Yet as Hillary Clinton fell in the polls last winter, her campaign and its supporters, whether intentionally or not, began floating racially coded attacks against Obama. They started with Obama’s admitted use of marijuana and “maybe a little blow when you could afford it” as a high schooler in Hawaii, described briefly with refreshing candor in his 1995 memoir, Dreams From My Father. [Emphasis added]

Yet another article from 2008, this one by Dave Lindorff at CounterPunch, is titled “How Clinton Courted Racists in Pennsylvania.” The “how” in the title included highlighting Obama’s membership in a black nationalist church overseen by practitioner of black liberation theology.

And who could forget Bill Clinton’s memorable 2008 observation that “a few years ago, this guy” — referring to Obama — “would have been carrying our bags.”

I would agree with Clinton’s statement that hatred and bigotry have no place in our public discourse. But if she really means this, maybe she should bear in mind that charity begins at home.