With over 50% of the precincts reporting, Fox is calling South Carolina for Trump.  There can be no surprise about the call, given that the percentages are falling pretty much where the most recent polls suggested they would.

South Carolina is a winner-take-all state for delegates, so Trump, with his win and 33-odd % of the vote, will get all 38. [Note: the new WordPress template doesn’t offer a ready strike-through option for text, as it did a few days ago, so I’ll just correct that sentence this way.  SC is NOT winner-take-all.  I had that wrong.  It looks like Trump comes out of this with 44 of 50 delegates, 29 of which are based on his win, and the rest apportioned from his performance in the state’s seven congressional districts.  Rubio, it appears, will get an apportioned 6 delegates from the congressional-district performance.]

As I type, Bush is on the Fox screen suspending his campaign.  Guess we, in our turn, can suspend referring to him as Jeb! now.  He may still come in fourth (he could still edge out Kasich, with whom he is in his own dead heat), but he’s way behind the front-runners, at 8.0%.

I’ve never hated Bush, but he’s the representative of an old-consensus GOP whose day is done.  That GOP has depended, as much as the Democrats do, on an electorate that doesn’t think for itself and lacks intellectual courage.  Waking up from such a slumber isn’t a pretty process, and I don’t think Trump is the right man to lead us in it.  But Bush was never that man either.

Trump does what’s most important to a big plurality of the electorate now: he sounds like someone who has woken up himself, as opposed to sounding like an automaton on political Prozac, robotically mumbling approved platitudes.  It may be foolish to go for Trump, but it’s more foolish, in 2016, to go for Bush.

The larger truth is that the people have to wake up first – only then will the right candidates seem attractive to our eyes.

I haven’t seen reporting specifically on the turnout, but they’ve been predicting that it would break records for the Palmetto State primary.

UPDATE:  Breitbart just weighed in with numbers.  650,000 and counting.

Over in Nevada, Fox has called the Democratic race for Hillary, whose 52-48 lead over Sanders looks solid.  The Democrats vote in South Carolina on the 27th. 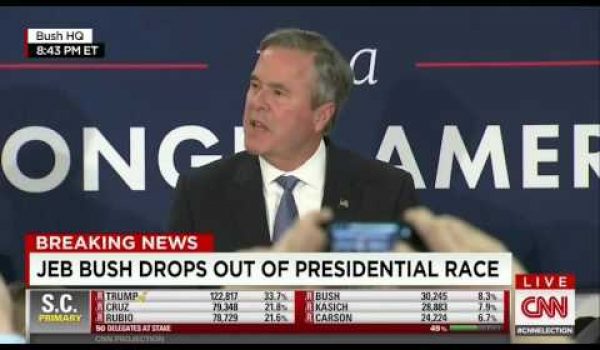