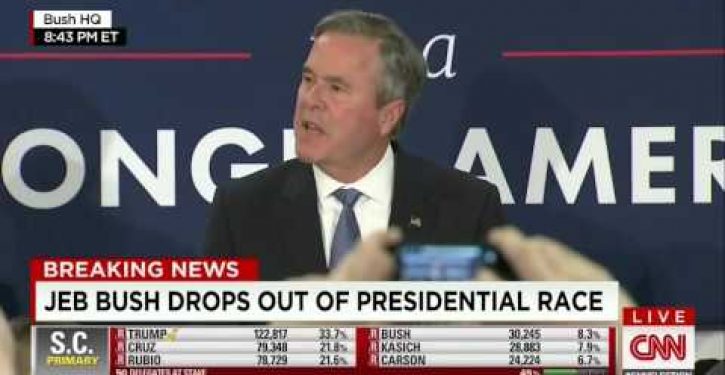 And then there were … five? (It’s hard to keep track in a field that started out with better than a dozen candidates.)

Earlier today, we noted in our Web Crawler section that the end was near for Jeb Bush, and tonight he made it official. After coming in fourth in South Carolina, behind Trump, Rubio, and Cruz, Bush announced from his headquarters, his voice quivering at times:

I’m proud of the campaign we’ve run to unify our country and to advocate conservative solutions that would give more Americans the opportunity to rise up and reach their God-given potential.

But the people of Iowa, New Hampshire and South Carolina have spoken, and I really respect their decision. So tonight I’m suspending my campaign.

In this campaign, I have stood my ground, refusing to bend to the political winds. We put forward detailed, innovative, conservative plans to address the mounting challenges that we face.

In truth, the campaign has bitter and will likely remain so, and Bush did his part to inject negativity into his dealings with his rivals.

The former Florida governor has not announced which candidate he will throw his support behind, if any.