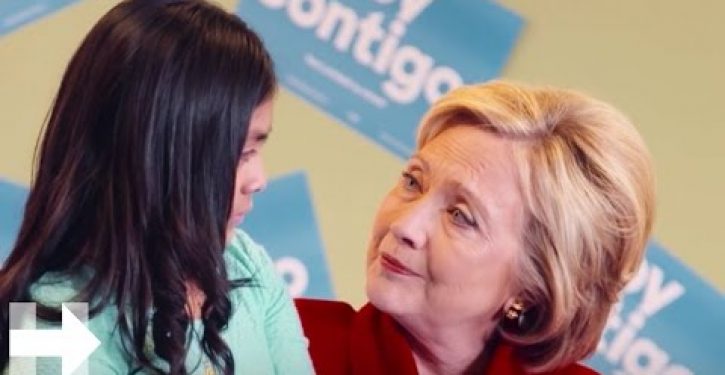 By now, you’re doubtless familiar with Hillary Clinton’s campaign logo, which consists of a block letter H with the crossbar extended to become an arrow.

The logo has received criticism. Some commentators have remarked that the capital H, which is blue, resembles the roadside symbol for a hospital: not the sort of association a candidate for political office wants prospective voters to make. Others have noted the equally problematic direction of the arrow head, which points right: not the sort of association a Democratic candidate for political office, etc.

My problem with the logo is its inaccuracy. I think it should look like this, which better represents candidate Clinton’s position on many issues:

Take immigration. Team Clinton just released an ad titled “Brave” that’s intended to get voters all misty over the plight of illegal immigrants. In the promotional spot, which follows, a 10-year-old named Karla Ortiz is given the floor at a Clinton townhall-style event. The child stands and with trembling voice tells her blue-eyed and blond-haired would-be abuela:

Clinton invites the little girl to come sit on her lap while she provides this assurance:

Those are nevertheless the realities, and Clinton is choosing to ignore them in her efforts to enhance her chances of garnering the Latino vote.

But that’s only part of the problem for the presumptive Democratic nominee for president. The bigger problem, as NBC News notes, seemingly reluctantly, is Clinton’s previous position: “that children from Central America who were arriving in droves to the U.S. border in the spring and summer of 2014 should be sent back.”

And there’s her ever-evolving point of view on a border fence. Although she recently castigated Donald Trump for the fence he proposes building along the southern border, Hillary last November boasted at another townhall:

I voted numerous times when I was a senator to spend money to build a barrier to try to prevent illegal immigrants from coming in. And I do think you have to control your borders.

That, too, was captured on video.