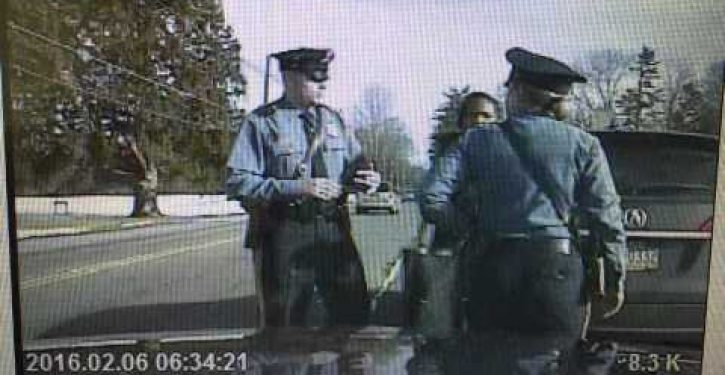 What’s the opposite of racism? I don’t know that such a word exists, but one is needed to describe the conduct of the police who pulled over Princeton University Professor Imani Perry last weekend for speeding. During the course of their routine check on Perry’s vehicle, the officers determined she had a warrant for an outstanding parking ticket and arrested her.

Following the incident, Perry published a 1,201-word Facebook rant in which she accused the police of treating her “inappropriately and disproportionately,” adding that “the fact of my blackness is not incidental to this matter.”

Further on in her diatribe, she writes:

We already know it IS the standard protocol for people in poor Black, Indigenous, and Latino communities to experience disproportionate police surveillance, harassment, violence, and punishment…. I’m asking you to understand that my experience, and my feelings, are directly and intimately tied to that larger truth. We unquestionably have a serious problem with policing in this society.

So we are told repeatedly, beginning with Barack Obama (of “the Cambridge police acted stupidly” fame) and trickling down to the entire Black Lives Matter movement.

Unluckily for Perry, one of the checks on police behavior that has been implemented in response to claims of abuse is the dashcam in patrol cars, which is something of a lie detector.

The dashcam video follows, and although at one point one of the officers can be heard asking Perry if she is OK and receiving the one-word response “No,” you get the sense that she is feeling apprehensive over being arrested and handcuffed — not because of any mistreatment. In fact, the officers could not be more cordial or courteous.

But watch the video and judge for yourself.

If the name Imani Perry sounds familiar, it is because she has graced these pages before. In July of 2013, I wrote about a group of teachers who planned to use the shooting of Trayvon Martin to illustrate  the harsh “reality” that Florida law allows people to hunt and kill black kids. One of those teachers was Perry, who wrote:

My two sons, bright, creative and kind African American boys, aged 7 and 9, both wept when they heard that George Zimmerman had been acquitted. They were afraid he, or others like him, might come for them next.

I did not anticipate that their young lives would be as much defined by the tragedies of the murder and execution of Trayvon Martin … as by the historic era of the first African American president. They already know the brutal truth of racial inequality, and that they are called to wage the battle against it, just as their forefathers and mothers. [Emphasis added]

It seems there is a pattern here.

Cartoon of the Day: Deeply wounded
Next Post
Shining a spotlight on climate change musical, other NSF grants